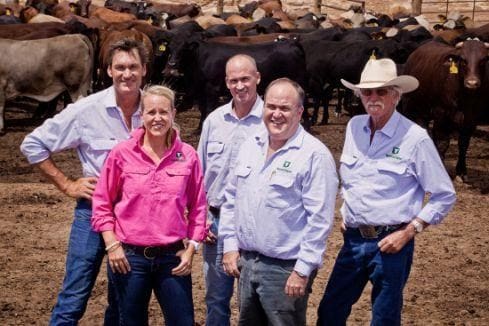 Smithfield founder Rob Smith, right, with daughter Barb Madden and her husband, Don, and sons Andrew and Jason in the pens at the feedlot near Proston.

ONE of Queensland’s family feedlot success stories paused to mark its 30th anniversary last week, with a celebration for clients, suppliers, advisors, staff and other industry stakeholders in Brisbane.

Smithfield Cattle Co marked the occasion of 30 years since the Shearer-Smith family’s Smithfield Feedlot started operations back in 1986, with a gala dinner at the Royal Queensland Show on Saturday night. Three generations of family members attended.

With the family patriarch and feedlot founder Robert Smith still active in the business, and all four siblings working across different divisions of the business, the evening was a celebration of what a dedicated and unified family can achieve, both in good times and bad, over a lengthy period.

Managing director Jason Shearer-Smith said he was proud to be a member of a strong family in charge of what was a really strong business.

“I have a great sense of satisfaction when I reflect on what we have achieved over the years and an optimistic outlook as we chart a course for the expansion of Smithfield Cattle Co.  It is nice to be able to take a moment to celebrate this milestone,” he told the gathering.

“When planning to celebrate our birthday, we thought the Ekka was the perfect venue as it is a celebration of the Queensland lifestyle and a place to promote our state’s finest agricultural achievements,” he said. Toasting the occasion on Saturday night were Andrew and Margot Shearer-Smith, Barb Madden and Jason Shearer-Smith.

Smithfield Cattle Co began operating as Smithfield Feedlot in July, 1986. Operations quickly expanded, and the site is now licensed to accommodate 18,500 Standard Cattle Units at any one time.

There were however some significant hardships that Smithfield Feedlot had to endure before evolving into the state-of-the-art grainfeeding operation that it is today.

The beef market crash of 1990 had a devastating impact on the business, leaving the feedlot with just six head of cattle on feed. Following this, however, beef prices began to resurrect and the business continued its development.

A second beef market crash during 1996/1997 saw grainfed beef prices plummet once again. This proved to be another serious test for Smithfield, however the business recovered swiftly once beef prices began to recover.

From this period on, Smithfield Cattle Co secured valuable supply contracts with long-term domestic and export customers, many of which have continued to this day.

In the first major change in the way in which grain was processed at the feedlot Smithfield in 1998 began tempering grain. From 1998 to 2000 all aspects of operation were expanded, with pen space, cattle numbers and employee numbers all steadily increasing.

A major upgrade of the feed mill was undertaken in 2000, with the implementation of a fully computerised grain tempering and rolling system. Early in 2001, Smithfield began steam flaking grain, producing a tremendous increase in grain utilisation and cattle performance.

Today, Smithfield has evolved into one of Australia’s premier feedlot operations. Smithfield Cattle Co has also become increasingly involved in research and development with a number of projects ongoing and a number planned for the near future.

This research participation has allowed the company to play a key role in developing and implementing new technologies that ensure the company’s two feedlots apply industry best practices.