Record losses for 100-day grainfed trading budget: is there a train-wreck looming?

IS THE grainfed industry heading for a train-wreck this year, as the huge chasm between current feeder values and finished grainfed cattle prices eventually takes its toll?

The disconnect between young cattle values and slaughter cattle has been increasingly evident for the early part of this year, and was scrutinised in a number of earlier articles on Beef Central.

One of the nation’s largest feeders of cattle, both in its own yards and as a large user of custom-feeding space in Queensland and NSW, told Beef Central this morning it is in the process of dramatically reducing its feedlot cattle numbers – perhaps back by 40-50 percent of what it had on its inventory earlier.

We don’t want to scare the horses, but it is hard to ignore the evidence.

As discussed in this morning’s separate eastern states weekly kill summary, the Aussie dollar this week climbed to close to US77c on Monday, pushing some processors’ slaughter grids another 10c/kg lower. Very flat international and domestic meat markets and larger volumes of cheap Brazilian beef flowing into markets like China, are all having an impact. Quotes seen this week for spot 100-day cattle for SEQ kills in coming weeks range from 515c to 525c/kg.

Processors are currently reporting ‘horrific’ losses on contracted 100-day cattle at around $230 a head. While that’s not the worst of all time (it supposedly hit minus $300 a head briefly around 2006), it’s up there. Some of those contracts would have been written at the peak of the market late last year, at 590c/kg or better. 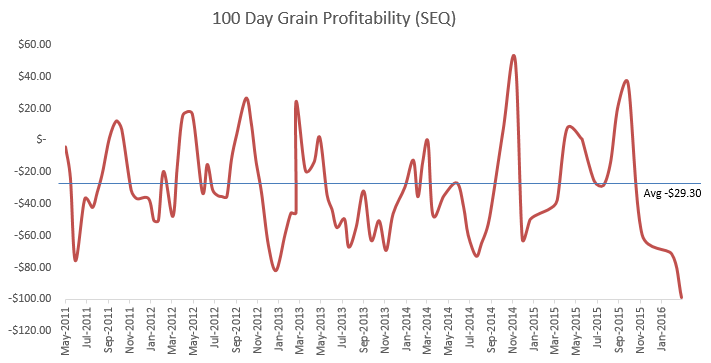 Never before in the five-year history of this report have we approached yesterday’s calculated trading loss of $98 a head, on our typical feeder steer entering a Downs feedlot on Friday, and exiting after 105 days on June 30. The result is a further $27 worse off than our previous calculation a month ago.

To put that result in some perspective, our average result over more than 80 closeout calculations since 2011 is minus-$29. Take interest out of the equation ($26), and it shows a lot of robustness in the numbers over that length of time.

Again, it’s important to remind readers that these calculations are not designed to reflect financial outcomes for feedlot owner-operators, but simply the trading result on buying a steer, getting him custom-fed and selling him at close-out to a processor. Outcomes for yard owner/operators feeding their own cattle are likely to be somewhat different, as advantages are taken in other parts of the business. Many feedlots breaking even on the trade, may technically still be in better off their overall business.

In summary in the broader market, what’s been seen is a divergence in relative values for young cattle and grainfed slaughter cattle since around October last year. If anything, some young cattle values have firmed slightly since then, while grainfed export cattle, and processing margins have fallen away.

That’s left a massive disparity, which at some point, has to be reflected in market sentiment, we believe. While current young cattle pricing clearly reflects the unusually tight supply of cattle after two record drought turnoff years, it cannot go on forever, in Beef Central’s opinion.

There is now clear evidence of vacancy signs in many large commercial feedyards in Queensland and NSW, despite the results posted for the December quarter in the most recent quarterly feedlot survey.

For this closeout report, we’ve kept the price for our typical flatback feeder steer 450kg liveweight ex Darling Downs (see full list of variables at bottom of this page) at 320c liveweight, the same as a month ago, but down from an all-time high of 330c in late November’s report.

Feeder grid offers last week were around 310-320c, but there are examples of similar cattle selling last week in a range from 300c all the way to 325c, suggesting feeder cattle within specifications continue to trade at a solid level.

Dry weather, particularly driven by NSW, more so than Queensland, is behind the current flow of cattle into yards.

Worth keeping in mind is the fact that our feeder steer only hit the 300c mark for the first time in our August 27 budget last year.

Pricing today’s steer at 320c/kg live means his total purchase cost at $1440 is $45 lower than rates seen late last year. Some would argue that a more representative feeder price today is 5c lower at 315c, which would put the steer’s purchase cost at $1417.

For this trading budget we have lowered our feedlot ration price by $5/tonne to $315/t, a $35/t decline from our late-November calculation – primarily on the back of weaker demand from feedlots as numbers on feed decline. Reader might care to re-visit Luke Walker’s regular feedgrain report posted yesterday.

As custom feedlots’ occupancy rates decline this year, some appear to be adjusting their margins in order to retain and capture business, to try to keep pens closer to full. That was a considerable factor in feedlot ration pricing over the past two very dry years.

Nevertheless, some yards appear to have grain stocks on hand that owe them a fair bit more than the spot market, Beef Central understands – and the fact that they are feeding fewer cattle than last year means it is taking them longer to get through those higher-priced stocks.

Today’s quoted ration price is well off the near-record highs seen back in July last year, when ration was quoted at $385/t – representing a $70/t slide since.

The current ration price delivers a total feeding cost of $493, back $9 on the previous report a month ago. At a nominated feeder steer purchase price of 320c, total production cost is $2039, back from a record high of $2140 in late November, but still very high by historical standards. If we apply the slightly lower 315c/kg steer purchase price, it softens the total production cost of $2016.

That ration value delivers a cost of gain in today’s calculation at 235c/kg, down from 260c/kg in November, providing some relief.

It also means that some yards presently may be feeding cattle somewhat lighter than our prescribed 450kg induction weight – perhaps 350-420kg – because of the comparative advantage in cost of gain over buying heavier feeders.

Depending in a range of assumptions (slaughter weight, dressing percentage, time on feed and other factors), starting with a 350kg steer fed for 125 days instead of a +420kg steer fed for 105 days could currently save as much as 10c/kg dressed weight in cost of production, our formula suggests. There’s a lot of provisos attached to that, however, including feeding the right cattle (type, maturity and condition), and individual feedlot performance.

But these are certainly the sort of considerations feedlots are currently pondering in an effort to rein-in production costs and improve their operating performance.

Again, the big impact on the trading budget this time around is forward pricing, with competitive SEQ grainfed processors offers for late June/early July delivery currently at around 550c. That’s down from 560c a month ago; 590c/kg in November; and a record high of 600c earlier last year.

Over that period, international meat market conditions have deteriorated significantly, and the A$ has continued its recent surge, rising US6.7c since late January.

Compare that forward slaughter price of 550c/kg with our breakeven figure of 578c (for steers bought at 320c/kg), and it represents an all-time high trading loss on the steer in this trading budget of $98.

Our previous highest loss was a figure of $81 back in January 2013, when feeders were worth around 175c/kg, but forward pricing on finished cattle was just 370c. If we apply the slightly cheaper steer purchase figure of 315c in today’s budget, the trading loss is not quite so bad, at minus-$76.

Worth keeping in mind, however, are some of the horrific losses reported in the US grainfed industry last year – up to US$700 a head, or $933 on local currency.

Today’s forward contract price of 550c compares with a spot market value on Friday last week for 100-day grainfeds of 525-530c/kg. On the strength of that, it appears some grainfed processors are attempting to subsidise their large inventories of forward-bought cattle with ‘discounted’ spot cattle, in a tough meat market environment.

To illustrate the point, if a processor today has forward-bought cattle coming in at 590c (bought at the peak of the market last year), versus spot-market cattle bought last week at 525c, it represents a difference of 65c/kg, or $231 on a 356kg carcase. It’s a way of softening the considerable blow on those more expensive cattle bought earlier.

In summary, the big price correction seen in slaughter markets this year has effectively overwhelmed a store/feeder market that continues to hold up relatively strongly, driven by one thing – tightness of supply.