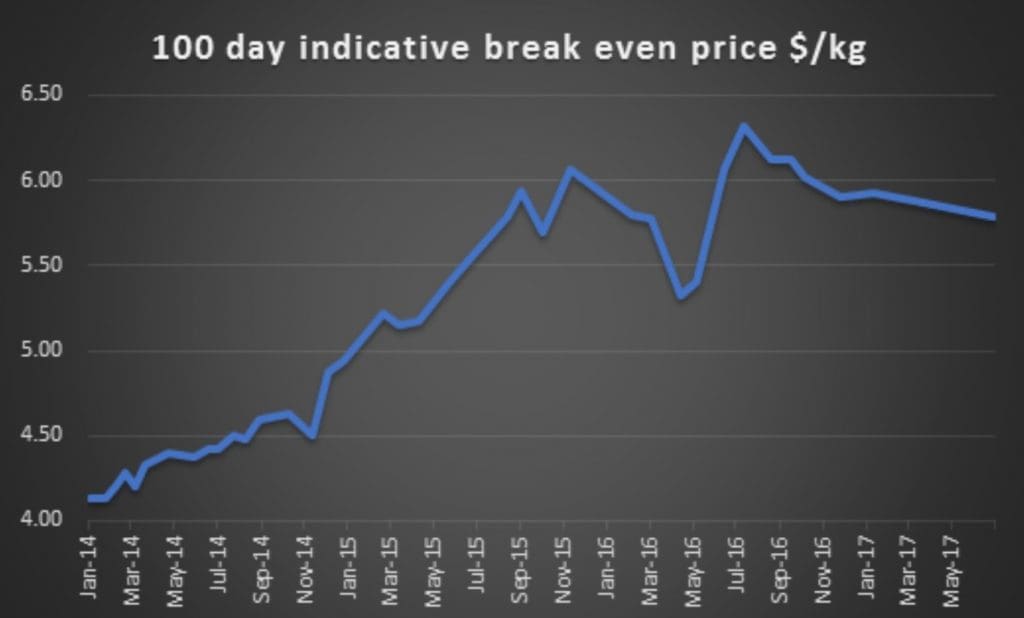 Beef Central’s latest grainfed breakeven calculation completed this morning clearly shows the impact that sharply rising grain price is having on the feeding proposition, and it’s only likely to worsen.

Looking back at a previous trading budget calculation using identical criteria (see full list at base of page) performed on March 24:

These variables resulted in a budgeted loss on cattle entering the feedlot on March 24 of $114 – equal to the worst result last year (September) when the breakeven was 612c and forward slaughter price was 580c/kg.

Since then, the young cattle market has been in decline after peaking in October (see this morning’s separate report on the EYCI threatening to move below 600c/kg).  Cattle numbers on feed also remain historically high, with anectdotal evidence suggesting little change since the industry’s March COF survey was taken, suggesting one million head on feed.

For today’s trading budget, based on a 450kg feeder steer entering a typical downs feedlot today, and closing out after 105 days in late October, we have applied a buy-price for flatback 450kg steers at 320c/kg liveweight, back 20c from the March budget outlined above. Feeders meeting our spec this week appear to be changing hands at rates anywhere between 310c and 320c/kg.

Weather is the big factor in that softening, along with normal seasonal turnoff, but another factor may be what these cattle will be worth come exit time in October.

Given the recent weakening in the slaughter cattle market, and the tightness in overall supply, the question is: Is that reduction in grid offers sustainable, or will processors be forced to lift rates for these cattle around exit time if spring seasonal conditions improve and supply tightens further?

A lot of people placing cattle in feedlot programs right now are evidently anticipating a fair rebound in September/October. Certainly Queensland can be very tight for slaughter cattle around late October exit-time, and this year will be worse than ever.

Ration price applied in today’s budget has leapt from $300/t in March, to $340/t today, with every likelihood of further rises ahead, given the lack of selling in the grain market today.

Pricing on ration in some yards may still reflect earlier, cheaper grain purchases, depending on grain positions, but ration pricing is inevitably likely to rise further, trade sources suggest. In simple terms, ration cost has not yet caught up with a grain prices, mentioned in our intro, that are on the march.

While it has risen, cost-of-gain is still relatively good at 254c/kg (+30c/kg), but compared with the live animal purchase cost at 320c/kg, is still relatively attractive. Earlier, some of the corporate operators were feeding cattle on beyond 100 days, not only to maximise the COG advantage, but also to deliver finished cattle over what was perceived to be a tighter supply period.

Total production cost (feeding, plus steer purchase) on today’s breakeven steer at $2079, is a little lower than our March calculation, when it reached $2107.

The breakeven figure on the calculation over the same three-month period has gone from 597c to 589c (-8c) today (see graph at top of page, plotting this series’s breakevens since 2014.)

Today’s breakeven figure remains close to the historical highs see at the back end of 2015 and mid-2016, when the breakeven reached an eye-watering 625c/kg on the back of near record high grain prices or feeder prices.

For finished grainfed cattle exiting the yard late October, processor forward contracts are currently around 560c/kg, having shown gradual decline from around 580c over the past three months. Tough conditions in international meat markets means there’s likely to be some desire by processors to drop that rate further, but countering that will be the supply challenge.

One observer suggests processors may just have to bite the bullet and continue to bid up to attract a supply of grainfed cattle during the quiet September October period.

All that delivers a loss on today’s trading budget of 29c/kg, or the equivalent of $104 on our typical 356kg carcase. That’s a $10 improvement on March, but still up there among the worst results recorded in this series since 2011.

For discussion purposes, here’s a couple of alternate scenarios on cattle that may perform a little better, either in the feedlot, or in terms of sale price:

Looking at 100-day grainfed cattle heading for slaughter this week, that went on feed back in March, forward contracts written on those cattle four months ago were priced around 565c/kg (perhaps a little less for non MSA). In comparison, the spot market for 100-day cattle today for southeast Queensland slaughter is more around the same money. That suggests that processors are probably around breakeven on 100-day cattle bought earlier on forward contracts, versus those bought in today’s spot market grid.

US lotfeeding margins ease… but still contrast sharply with Australia

Meanwhile, US feedyard managers are watching currently large profit margins slowly shrink, as the market settles into a seasonal summer slide. Average feeding margins last week were reported Sterling Marketing at US$242 per head, US$43 lower than the previous week, and a whopping US$250 per head lower than a month ago.