A NEW Grain Fed beef standard, called Grain Fed Finished (or GFF) will be available for beef industry use from 1 September.

The minimum standard requires cattle to be produced within the National Feedlot Accreditation Scheme production system, be raised on a specific high energy ration for a minimum 35 days on feed, and successfully achieve Meat Standards Australia grading requirements when processed.

The standard is designed to fill a void previously filled by informal terms like ‘grain assisted’ and ‘grain supplemented.’

“Introduction of the new GFF Standard is the result of reviews conducted into both the NFAS and the AusMeat Beef Language and follows broad consultation with feedlot operators, beef processors, retailers, brand owners and Industry representative bodies,” she said.

“The existing grainfed standards are widely recognised for delivering high quality Australian grainfed beef, and so the GF and GFYG standards will continue to be available without change, with GFF providing an additional feeding option for NFAS accredited feedlot operators,” Mrs Herbert said. 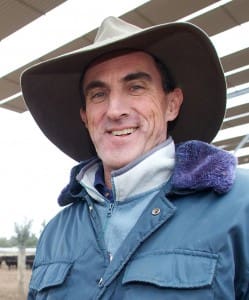 One of the key features of the GFF Standard is the integrity provided by the NFAS production system and the positive connotations that could be attached to its beef products, according to Jim Cudmore, chairman of Feedlot Industry Accreditation Committee (FLIAC), which oversees the NFAS.

“The NFAS is the quality assurance program for the Australian cattle feedlot industry which includes stringent animal welfare, nutrition and environmental requirements. The sourcing of livestock from NFAS accredited feedlots is a prerequisite for beef processed in AusMeat-accredited processing establishments being described as grainfed,” Mr Cudmore said.

ALFA and FLIAC, in consultation with industry, chose the name Grain Fed Finished to expand the current grainfed offering and accurately describe the resulting product.

“We certainly wanted to include ‘Grain Fed’ in the description and decided that ‘Grain Fed Finished’ accurately represented the product,” Mr Cudmore said.

“With the specification including fewer days on feed, Grain Fed Finished indicates to the market that the animal has been finished on a dedicated grain feeding regime,” he said.

Introducing a third standard involving Meat Standards Australia for grainfed beef was a sensible evolution for lotfeeding in Australia.

“Over the last two decades the genetic base of the cattle we’re feeding has improved greatly, so that an animal that may have had to have been fed, for example, for 120 or 130 days to get a certain eating quality outcome in 1995 has the genetic capacity today to achieve it much sooner,” Mr Cudmore said.

“At the same time, our feeding systems have dramatically improved as we’ve learnt to target feed diets to specific groups of cattle.

“The industry has improved, and the cattle have improved, so we can now do things today in a shorter timeframe and still achieve the same eating quality outcomes, or even better,” he said.

Adoption of the Grain Fed Finished Standard from 1 September will be voluntary and a commercial decision between brand owners, meat processors, non-packer exporters and NFAS accredited feedlot operators who supply them.

NFAS accredited feedlots and AusMeat beef processors have received AusMeat Advice on how to adopt the new standard into commerce.