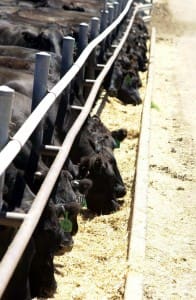 CATTLE on feed numbers for the March quarter have shot up to their highest level in seven years, according to the latest quarterly national feedlot survey released this morning.

That’s the highest number seen since December 2006, shading an unusual spike reported in figures in the June 30 quarter last year, when occupancy, according to the survey, reached 873,000 head.

Apart from those two quarters, the Australian cattle numbers on feed have basically fluctuated within a relatively narrow band between 700,000 and 800,000 head for the past five years, marking this latest figure as a substantial break-out movement.

Australian Lot Feeders Association president Don Mackay agreed that the timing of the most recent survey at March 31 probably failed to capture the impact of widespread rain across Eastern Australia towards the end of March.

He said the result was driven by both an influx of cheaper drought-affected cattle entering feedlot pens during the last quarter, as well as heightened demand for Australian beef overseas.

Feeder steer and heifer prices were down 2pc and 4pc from the December average, or 4pc and 9pc year-on-year, he said.

“The results are hardly surprising given ongoing drought conditions. Capacity utilisation of feedlots, at 79pc, was also the highest experienced since December 2006, also influenced by drought,” Mr Mackay said. Queensland occupancy reached 81pc last quarter, while NSW was at 74pc.

The trend towards greater numbers on feed and higher pen occupancy would have perhaps been even more pronounced over the past 12 months, if grain prices had not risen so sharply.

Meat & Livestock Australia’s manager for market Information and Analysis, Tim McRae said grainfed beef exports for the March quarter were up 12pc year-on-year to 52,500t, with declines to Japan offset by increases to China, the Middle East the EU and the US.

Quarterly grainfed beef exports to Japan declined 4pc year-on-year while they increased 19pc in South Korea, 47pc in China, 77pc in the EU, 38pc in the Middle East and over 200pc into the US, he said.

Asked about the outlook for numbers on feed in the current June quarter, Mr Mackay said it would be interesting to see what happens, going forward.

“There was the rain around late March, and cattle prices then spiked briefly. Since then, however, there’s been a lot more cattle come back onto the market as the reality of winter arrives.”

“What’s happening now is that heavy feeders for export markets are getting pretty hard to come by, and prices are remaining reasonably strong. Some of the steers that Rangers Valley’ buys regularly from producers at this time of year are 70 to 80kg lighter than normal,” Mr Mackay said.

“Everyone is recognising that supply of good feeder-weight cattle through the winter is going to be tight.”

But with the widespread expectation that well-finished slaughter cattle are going to be short in the back half of the year, is that going to stimulate feedlot lot operators and custom feeding clients to place cattle on feed heading into spring?

“I would suspect so,” Mr Mackay said. “Despite the very large kills being recorded in past weeks, the demand for meat, internationally, remains very strong. While that demand exists, the guys writing contracts forward for 100-day shortfeds and other grainfed cattle will continue to push forward, with some confidence. You’d have to think that there is going to be reasonable rates for cattle during spring, and that should help support numbers on feed, in my opinion.”

“Autumn rain like that we’ve recently had is very different to spring rain, in terms of impact on the cattle market. It’s great to get it, but in this country (Glen Innes) two weekends ago, we had snow and a maximum daytime temperature of 1C. People in the higher, colder country just won’t buy cattle at this time of year,” he said.

The latest March feedlot survey, in Beef Central’s opinion, also showed some erratic and perhaps questionable movements in feedlot capacity, both at a national and regional level.

Within that, it suggests that the smallest category for feedlots 500 head or less in size declined by 30,000 head over the past year, which is perfectly plausible, given poor returns shown in Beef Central’s regular grainfed trading budgets.

Much less plausible is a suggestion that the capacity in feedlots 1000 to 10,000 head in size has declined by more than 50,000 head across Australia in the past year.

Broken down on a state-by-state basis, the survey suggests the 1000-10,000 head category is basically unchanged in size in Victoria and South Australia, while numbers in Queensland and WA have supposedly fallen by 50,000 head and 26,000 head respectively. In contrast NSW has supposedly lifted its capacity in the 1000-10,000 category by 22,000 head.

None of those survey statistics stand up to any sort of scrutiny, and it again raises questions about the sampling methodology used by ABARES to deliver the survey.