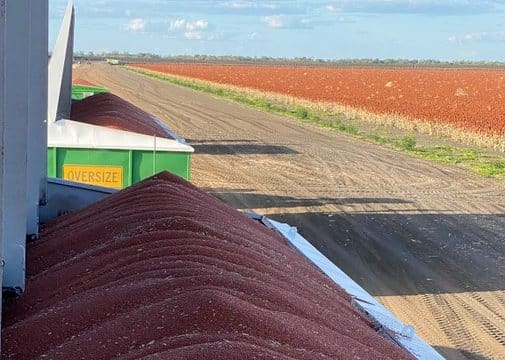 The sorghum harvest is in full swing, and with a long way to go, in southern Queensland and northern NSW. Photo: Mick Humphries, Moree

MOVES in feedgrain prices have been limited in the past week as domestic consumers keep buying to a minimum in a tight road-freight market where export is the focus.

Strong bids from exporters accumulating downgraded wheat into southern ports in particular has caused some up-country consumers to follow the market up.

This is sparking interest from growers looking to sell some grain to pay for inputs for their 2022 winter crop as the main planting window nears.

In the north, the sorghum market is firing on all cylinders amid accumulation for a hectic bulk and containerised shipping program aimed at China.

Fine weather in the past week has allowed growers in southern Queensland and northern New South Wales to spray out or advance the harvest of their sorghum, with high quality and bumper yields being reported.

“I’d suspect this will be the biggest sorghum crop Queensland has seen for eight to 10 years,” Mr Taylor said.

The latest estimate from eastern states bulk handler GrainCorp supports that, with the company earlier this month saying it forecast the current sorghum crop for Queensland and NSW combined at 2 million tonnes.

Domestic consumers are not looking at sorghum because barley and SFW wheat are a better nutritional fit, and sorghum is too expensive to price itself into rations.

“Wheat is drifting a bit lower; the bottom grades are firming, and the top grades have eased a little bit.”

Mr Jones said consumers were only just coming back into the market after booking considerable tonnage at harvest.

“SFW delivered Port Kembla is around $335/t, and that’s their competition.”

He said the barley market has been quiet, as export demand via Port Kembla was limited, and competition for barley general was modest.

SFW is being sought by feedlots across southern NSW, with western Riverina ones paying about $10/t more than those in the east in order to keep local grain away from export of Portland and Geelong.

“By comparison, there’s not a lot of SFW in Victoria, and exporters are picking it up in NSW.

“All the track demand we’re seeing in Vic is for SFW and GP wheat; that’s what the boats are coming for.”

Mr Jones said some planting of dual-purpose canola was already occurring on the south-west slopes of NSW.

“That’s creating a bit of need for cash flow, and in the past week or two, the ex farm market has gotten busier.”

Saputo Dairy Australia trader Tim Rhook said any firming in the market being seen was due to the tightness of road freight.

“The delivered markets are still pretty firm…and I really do think we’re seeing the market trade a tight complex on freight.”