The A$ sank to around US62c in value late last week, continuing a recent rapid decline, and back about 16 percent in value on this time last year.

Currency was a common topic of discussion among delegates mingling around more than 60 commercial trade displays at the grainfed beef industry’s biennial BeefEX conference which started in Brisbane this morning.

One feedlot which is feeling the currency impact, as well as long logistics delays in sourcing overseas (and even Australian) made spare parts and equipment, is NH Foods Whyalla feedlot near Texas, on the Queensland NSW border. 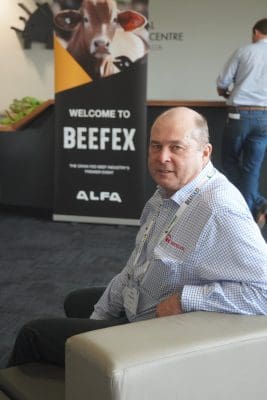 He thought the purchase price might now be 14-15pc percent higher than what it might have been earlier, in Aussie dollars.

“While we are copping some pain because of the currency movement, on the upside it is providing some much needed relief for our NH Foods meat sales team, which is obviously under a fair bit of pressure at the moment. For us, that is providing some compensation, but for yards that are not part of an integrated meat business, that opportunity is not there.”

Whyalla’s replacement feed bin is due to be loaded in California for shipment next week. It was ordered eight months ago.

“This has been the problem: lead-times on delivery of all equipment are just so long,” Mr Fitzgerald said. “We ordered a new truck (Australian made) to put under the new Laird feed delivery bin in September last year, and we think it will go onto the build line in December this year,” Mr Fitzgerald said.

Asked whether the delays had created operating challenges in the Whyalla yard, he said things had not been ‘too bad’, but the crew had been very careful around how the existing trucks are used and serviced. That including precautionary maintenance, and attention to bearings and diffs, etc.

“It’s all about risk-mitigation, until the new equipment finally arrives. Even getting parts, if a common brand front-end loader breaks down, it will take at least six weeks to get those parts,” Mr Fitzgerald said.

It’s meant Whyalla has had to resort to dry-hire loaders on site just in case of problems.”

All the logistics challenges and delays meant Whyalla’s risk profile had just gone ‘through the roof’, he said.

“And to be honest, while the COVID impact is clearing, I don’t think the logistics problems have yet started to ease. I thought we would be getting into better access on parts by now. We did a gearbox on our manure screener recently, and we’ve been told it’s a 52-week wait for a replacement.”

“In the meantime, we’ll just have to try and dry-hire something to carry on.”

Supplying Whyalla’s new mixing box is US feedlot mixing equipment manufacturer Laird, based out of California.

“Currency is certainly making it tougher for us to do business in Australia at present,” Laird’s international dealer sales manager David McComb, said at BeefEX this morning.

“I wish I could flip a light switch and turn it back the other way, but what it’s done is to motivate potential customers to plan ahead more,” Mr McComb said.

“We have Australian contacts who earlier said they did not need a feed truck right at that time, but were prepared to buy it then because it was cheaper, due to favourable currency movement.”

“They were using the currency opportunity, when it arose. They are doing it for two reasons: exchange rate movements, and also because of the long time it takes to get the product landed and in use.” 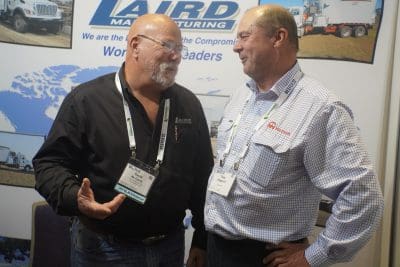 “Rural commodities are doing a lot better than other parts of the economy, but what’s going to squeeze you is input costs,” he warned.

Whyalla’s Tony Mr Fitzgerald said currency had simply added to the raft of challenges faced by lotfeeders this year – weather impact being a primary example.

“Because of wet conditions, pen cleaning has become a much bigger task this year. Instead of removing 100cu m of dry material, it might be 300cu m of wet material.”

The local Texas region had had back-to-back extremely wet winters.

“Last year was a record for rainfall, but this year, it’s not so much the amount of rain, but it just hasn’t stopped drizzling, which means we start losing time. We’ve just had to keep going, even when conditions were far from ideal for pen cleaning. Normally we wait for it to dry out first,” Mr Fitzgerald said.

The wet winter conditions in the south had also impacted backgrounding performance, he said.

“We stacked-up a fair few young cattle on grass earlier to get us through the winter squeeze, which we thought would be on. But some of those southern cattle that we had on grass have done nothing – 25kg weightgain in 200 days – because of the constant wet conditions.”

“It’s meant those forecasts on when those cattle should be entering the feedlot have been shot to pieces – either pushed back, or we’ve brought them in at sub-optimal weights because we’ve needed the numbers. That comes at a cost.”

“Equally, we’d normally expect to see a flush of feeders available at this time of the year, but because of the wet weather, that has not yet happened this year. Cattle in the paddock just aren’t ‘doing’ yet, and until we get some sustained warmth and pasture starts to respond, the problem just keeps getting kicked down the road.”