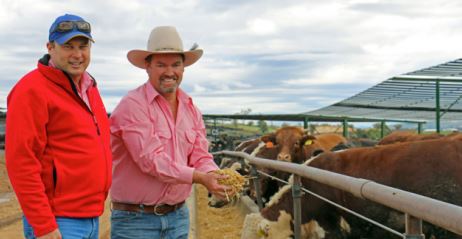 Killara’s Tony Fitzgerald and Andrew Talbot with steers involved in the trial.

PRE-VACCINATED Hereford steers in a 70-day feedlot trial have produced lower health costs and morbidity rates for bovine Rhinotracheitis than other feedlot cattle.

They were compared against 4111 British bred steers, of which 50-60 percent were pre-vaccinated against the contagious IBR respiratory disease.

Killara management attributed 80pc of all cattle mortalities to BRD, and estimated performance loss due to sickness at $70-$100 per pulled animal (including labour costs and social structure upset within the pen).

They draw a direct correlation between pre-feedlot vaccination and above average feedlot performance for daily weight gain and feed conversion efficiency.

Bovilis MH + IBR is a combination vaccine used to protect against bacterial and viral causes of BRD.

The cattle were fed as one mob and the results compared to 4111 steers on feed at Killara during the same period.

Over the 70-day feeding period, both mobs recorded an average daily gain of 2.1kg and an MSA index of 55.9. The Hereford pen had an average feed conversion efficiency of 1:6.1kg compared to the control pen of 1:6.04kg.

The trial showed no differences between the Hereford and black baldy steers.

He suggested 70pc of that cost was avoidable, through an increased focus on health protocols on-farm leading to feedlot entry.

“We’re happy to buy Hereford cattle where they are pre-vaccinated, yard-weaned and prepared adequately for a feedlot program,’’ he said.

“The key point is when cattle are pre-vaccinated and prepared, the likelihood of a positive feeding experience is high.’’

He said pull rates in the feedlot averaged 15pc but often rose to 25pc during “cattle flu season’’ of February-March.

“When we look at procurement for our domestic programs, having properly pre-conditioned calves under a pre-vaccination program is absolutely critical,’’ he said.

“Cattle may come from wonderful female base in a closed herd but if they don’t have any natural immunity – if they are not pre-vaccinated, we can end up with train wrecks when it comes to feedlot performance. And surplus heifers from those closed herds are the highest risk category in the feedlot.’’

Mr Talbot said the challenge period for feeder cattle to express BRD was from days 21 to 30 on feed.

“If an animal spends 30 days in the hospital pen and their performance has been compromised, it is unlikely they will catch up to the weights of their pen mates, and they will finish 20-30kg lighter, that loss of performance is never recaptured.’’

Mr Talbot said cattle were assessed on arrival on risk factors including multiple vendors and transport.

“The correct pre-conditioning of cattle allows them to perform to their genetic potential,’’ he said.

“Any factor which impacts on performance, such as saleyards, transport, non-weaning, socialisation and wet weather, cuts into their ability to perform to their best genetically.’’

“We moved away some time ago from a one-price-fits-all  policy – we believe some cattle are worth more than others based on the lot size and previous performance,’’ he said.

Killara provides suppliers with the Bovilis MH + IBR vaccine at a cost of $7-$8/head for an on-farm vaccination at 10-14 days before delivery. A second vaccination is carried out at feedlot arrival.

“Ultimately, we would like to get to a situation where all cattle we buy are receiving two shots on-farm, and we are in the process of getting there,’’ Mr Talbot said.

“In the last 12 months, the uptake by suppliers of the vaccine has been well over 50pc. We were keen to work with Herefords Australia on this trial – by educating and informing producers, hopefully pre-vaccination will move from a trial to normal practice.’’