Will we see a beef cattle ship to China this year? 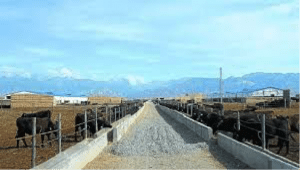 The opening of a feeder and slaughter cattle export market to China eight months ago has generated a lot of fanfare but little actual trade so far.

Despite some early over-the-top predictions that the new market would soon be buying one million cattle a year, the only trade so far has involved a single air consignment of 170 slaughter weight cattle last October.

So what is going on in China? Does it still want Australian cattle, and, if so, what is stopping more trade from occurring?

In conversations Beef Central held with a range of prospective cattle importers in China last week, it seems that bigger volumes of trade, including a first sea shipment, may not be too far away.

First and foremost, there is clearly no shortage of interest at a commercial level within China for Australian cattle.

Several Chinese importers Beef Central spoke with are, right at this minute, building large (10,000 head plus) quarantine facilities, feedlots and abattoirs near sea ports and inland airports for the specific purpose of importing Australian cattle.

This infrastructure is being built to satisfy Chinese Government requirements that cattle imported under the new protocol must be quarantined, fed and slaughtered within 50km of their point of entry to China.

Cattle importers are wasting no time building the facilities they need to get the trade underway. One enthusiastically showed us pictures on his smartphone of a very impressive 20,000 head feedlot of bright, gleaming steel and a large abattoir nearby that appears to be about the size of a typical Bunnings warehouse. This was all built in the last six months and is now ready to take Australian cattle.

Two key hurdles appear to be standing in the way of greater volumes of trade occurring at this stage.

The first is China’s ongoing sensitivities around biosecurity issues and the additional conditions it has placed on the trade since the protocol was signed last July.

Some of these conditions such as mandatory foot bathing of all animals are well above what other markets require and add large costs which are negating the commercial viability of the trade.

Officials from China and Australia are still negotiating to find a compromise that will both satisfy China’s biosecurity concerns and allow a commercially-feasible trade to operate.

Until these issues are resolved it seems likely that trade will continue in the form of sporadic low-volume air-freight consignments for the short term.

One importer told Beef Central he has import permits to commence an air-freight consignment from Australia in the next few months, and it is likely others are also being planned.

Only when enough air-freight deliveries have been undertaken to satisfy China that biosecurity concerns can be managed are large- volume sea shipments likely to follow.

Importers also emphasised the point that while the Chinese Government is concerned about biosecurity issues, it is also very supportive of the trade commencing, and they seemed very confident that more import permits will soon be granted.

The second major hurdle is the current high price of Australian cattle.

With the costs of air-freight included, Chinese importers currently have to pay somewhere over $5/kg liveweight to be in the market for Australian cattle.

They have to outcompete other export markets which are geographically closer to Australia and which have easier protocols to satisfy.

Chinese importers are also limited by their protocol to buying HGP-free cattle, and cattle from Southern Australia for most months of the year due to bluetongue rules, which cost more to freight to China than cattle from northern Australia.

However, despite the pressures on the commercial viability of the trade at present, there appears to be enough determination by importers to get the trade up and running and to get their new infrastructure operating that some importers are likely to commence importing cattle even if at a commercial loss initially.

While not confirmed, there is also some speculation that the Chinese Government may subsidise the cost for importers of buying cattle from Australia to get the trade up and moving.

A number of importers said they are also now importing air-freighted chilled quarter beef from Australia to process further in their abattoirs as a means of utilizing that infrastructure.

Delay not necessarily a bad thing

That the trade is taking so long to find its feet since the protocol was signed is no bad thing according to many in the industry.

It has given exporters and importers time to build solid relationships based on mutual trust, and for the requirements of Australia’s mandatory animal welfare system ESCAS to be fully understood and incorporated in Chinese supply chains before high volumes of trade commence.

It also means that the trade has avoided the growing pains and sourcing issues that would have come had China suddenly ordered hundreds of thousands of cattle at a time of extremely tight cattle supply in Australia.

So how much trade is likely to occur this year?

The consensus seems to point to a possible volume of 20,000-30,000 slaughter-weight cattle, made up of several air-freight shipments in coming months and then, assuming those deliveries help to iron out China’s concerns around biosecurity, a couple of sea shipments could be likely later this year.