WESTERN Australian farmers have welcomed news this morning that the Federal Government has approved an application for a livestock export license by Rural Export and Trading WA (RETWA), the Australian arm of the Kuwait Livestock and Transport and Trading (KLTT).

The company has arrangements in place for sheep and cattle exports into the Arabian Gulf countries of Kuwait, the United Arab Emirates and Qatar, Mr Gordon said.

“In line with KLTT’s long-standing shipping and import supply chains, RETWA’s livestock export licence will be used to supply markets in the Arabian Gulf, primarily Kuwait, Qatar & UAE,” he said.

“We very much understand our obligations in terms of meeting the expectations of the regulator (DAWR), the Federal Minister and most importantly the Australian public.

“RETWA, our contractors, suppliers and customers need to fully understand the role and expectations of each and every individual in the export process if we are to have a sustainable future.”

KLTT is a long-time trading partner of Emanuel Exports and its subsidiary EMS Rural Export, the export licenses of which were cancelled earlier this year after images of dead and heat stressed Australian sheep enroute to the Middle East were publicly released.

Following the cancellation of Emanual Exports’ license in August RETWA, KLTT’s Australian entity, applied for its own export license, and has been waiting for from DAWR since that time.

The KLTT’s two AMSA-accredited livestock vessels, the Al Shuwaikh and the Al Messilah, have been anchored near Perth for the past two months.

In 2017, KLTT imported 1.28 million Australian sheep, out of the 1.88 million exported live from Australia.

However, its 2018 import program has been impacted by the cancellation the Emanuel Exports and EMS Rural Exports licenses earlier this year.

Mr Gordon recently said RETWA aimed to send sheep to the Middle East within three weeks of having its licence approved, should that approval be granted.

The Al Messilah has had a capacity of up to 75,000 sheep and the Al Shuwaikh has carried up to 80,000 sheep, before new stocking density rules were put in place by the department.

The department recently issued an export advisory notice (more on this below) detailing changes to conditions for the export of sheep by sea to the Middle East from November 1 until the implementation of revised Australian Standards for the Export of Livestock in 2019. This means vessels carrying sheep to the Middle East via the Persian Gulf and Red Sea will 17.5 percent lower than the current ASEL and the agreed heat stress assessment plan recommended in the McCarthy Review. Vessels will also have to have pen air turnover independently verified by a qualified mechanical engineer.

“In line with the revised loading requirements announced by  DAWR and applicable from November 1, sheep exported will be stocked at least 17.5 per cent below the rate set out in the Australian Standards for the Export of Livestock (ASEL),” Mr Gordon said.

“The two-to-three week procurement and pre-export process will now commence, with approximately 130,000 sheep to be sourced from WA producers and prepared for export from Fremantle to the Arabian Gulf.”

WAFarmers President Tony York said the regulator’s approval of the license for RETWA was a positive step forward for the live export trade in Western Australia.

“The Western Australian agriculture industry has felt tremendous stress over the past four months due to the sudden halt in live trade, particularly losing the opportunity to service the Islamic religious festivals,” Mr York said. 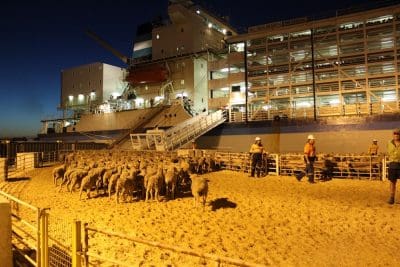 “KLTT is one of Australia’s biggest sheep buyers, importing 1.28 million Australian sheep in 2017.

“WAFarmers is pleased with this outcome and hopes that now RETWA’s export licence has been granted, the live sheep trade can kick into full swing.

“We understand that RETWA aim to send sheep to the Middle East within three weeks, which should inject some confidence back into the industry.

“WAFarmers are certain that with the recent changes to conditions of sheep exporting which will see a 17.5 percent lower density rate than the current ASEL standards and the implementation of the McCarthy recommendations, any shipment of animals to the Middle East will be done under the highest welfare standards to ensure the animals wellbeing.”

Chair of the WAFarmers Export Committee Jeff Murray said the industry looks forward to other licenses being granted to enhance competition in the market place.

“This gives me some certainty about planning for the 2019 season,” Mr Murray said.

“Sheep farmers are not the only ones hurting from the halt in exports, and we are hopeful that the RETWA export licence approval will bring some much needed stability and assurance to farmers, transporters, feedlotters and all involved across the trade.”

Last Friday the Department of Agriculture and Water Resources announced its intent to implement new conditions above the Australian Standards for the Export of Livestock (ASEL) for live sheep exports departing from 1 November 2018.

The new conditions would require journeys outside the northern hemisphere summer from 1 November 2018 to implement:

DAWR said the proposed conditions were based on the best available evidence, supported by feedback from independent observers aboard live export vessels travelling to the Middle East and other relevant information.

The department intends these arrangements to remain in place until the comprehensive ASEL review has concluded, which will update the export standards according to the best possible scientific evidence.

Exporters are also required to comply with other changes recommended by Dr Michael McCarthy in his review of the conditions for the export of sheep to the Middle East during the northern hemisphere summer, including:

The review of the ASEL and the further consultation and testing of the heat stress risk assessment model are underway and are due to be completed by the end of 2018.

Both processes will support the development of high standards for live exports going forward.

The Federal Government is also expected to announce the results of the Moss Review into the performance of DAWR as te live export industry regulator any day.

The President of the Pastoralists and Graziers Association (PGA) Tony Seabrook, met this week with Federal MPs and Senators in Canberra, including Agriculture Minister David Littleproud, to discuss the economic and social importance of the live sheep and cattle trade on Western Australian producers and regional and remote communities.

“This was a tremendous opportunity for many MPs and Senators to hear directly from the coal face on how recent decisions by the live exports regulator are affecting the livelihoods of thousands of producers, and the viability of regional industries and communities in Western Australia,” Mr Seabrook said.

“It was refreshing to see the support from the Government and from backbenchers from across the country for the continuation of the live export industry.

“Western Australia is the largest exporter of sheep in Australia with over one third of sheep sent to markets in the Middle East – making the trade a vital and important part of the WA regional economy.

“It has been close to 5 months since the last shipment of sheep to the Gulf, and so far approximately 19,000 sheep have been exported from Western Australia to other markets, costing WA sheep producers almost $60 million in farm gate revenue.  During the same period last year, over 532,000 sheep had been exported from Western Australia, with the estimated farm gate return worth more than $62 million.

“This figure doesn’t include the flow on to other regional industries who are reliant on the live export trade, including transporters, stock agents, and feed suppliers, nor does it include many small businesses in regional communities dependant on a vibrant live export trade to sustain their livelihoods.

“In Western Australia, the live export industry is the largest buyer of our livestock, supports regional businesses, and provides much needed regional jobs, which in turn strengthens our regional communities.

“Any move to phase out, or ban the trade will only serve to destroy regional jobs, regional communities, regional businesses, and hard working Western Australian regional families.

“This is why it is so disappointing to listen to shadow Agriculture Minister Joel Fitzgibbon’s comments at today’s National Farmers Federation Conference that the Labor Party believes the live sheep export industry has no future, and should just ‘move on’.

“While Labor is happy to throw WA sheep producers  “under the bus” in order to appease a small but vocal number of animal activists who want to see an end to the trade, the reality is, once they ban live sheep exports, cattle will be next.”