The concept of integrating beef production with oil palm plantations has held strong potential for many years, but it has only been in the past year or so that emerging factors have conspired to change the attitude of plantation owners and governments, causing them to re-examine the palm integration model with a fresh perspective, as Dr Ross Ainsworth reports

The production of beef cattle integrated with oil palm plantations is arguably more efficient than any other production model available today with the exception of Indian dairy buffalo beef. 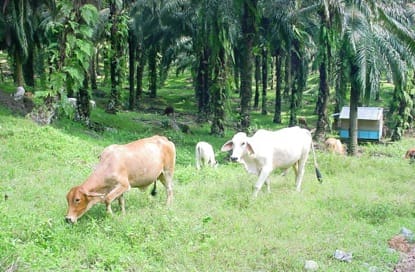 The key elements of this production system are :

The two big global palm oil players are Indonesia and Malaysia with about 9 million and 5 million hectares of plantations respectively. After some areas are excluded for a variety of production reasons (tree age, soil types, slope) the available area for cattle is reduced by about 30pc. Further areas are excluded from the possibility of grazing due to the security concerns of leaving cattle unattended over-night in locations where segments of large rural populations would present an unacceptably high threat of theft. This leaves perhaps 5 million hectares of suitable plantation area for cattle integration, the majority of which is located on the island of Borneo.  At a conservative stocking rate of 3 hectares for one breeding female, the potential palm plantation herd is somewhere in the vicinity of 1.6 million breeders. 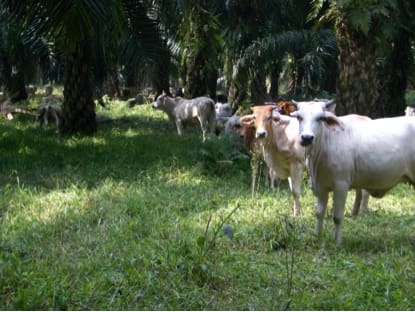 So why doesn’t Malaysia and Indonesia already enjoy the fruits of this highly efficient cattle production system?

For the last 35 years Malaysia has had access to the exceptionally low-cost Indian buffalo beef as well as cheap live cattle originating in Myanmar, delivered overland through Thailand.  However, the cost of Indian buffalo beef is rising fast and the price of live cattle imported from Thailand is now more expensive than Australian live imports. Some Malaysian planters are already reviewing their position on cattle integration, a proposition that is being encouraged by growing plantation labour shortages.

Indonesia has had easy access to feeder cattle from Australia since the early 1990’s as well as having a significant domestic beef cattle herd. In the last 5 years that domestic herd has been drastically reduced. The recent entry of Vietnam into the live cattle market with the possibility of Thailand and China also joining the competition in the near future places new doubt on the capacity of Australia to supply the numbers needed to sustain the Indonesian market for fresh beef. Asian beef and cattle prices are rising and can only continue to increase.

Palm plantation owners have the luxury of a highly profitable enterprise. The margins available from investments in palm oil production have always far exceeded those from beef production.  Poorly managed cattle integration projects have the potential to reduce the returns from the primary business of the plantation. It has only been in the last year or so that the emerging factors described above have conspired to change the attitude of plantation owners and governments, causing them to re-examine the palm integration model with a fresh perspective. 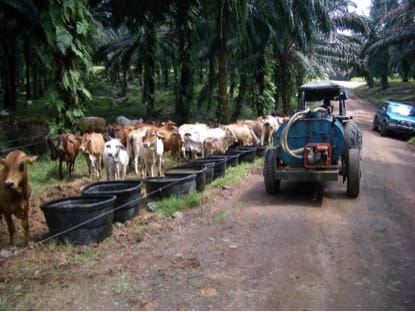 The good news is that there is only one source of breeders suitable to establish this new beef production industry and that is northern Australia because only high-grade Brahman cattle are suitable for this wet tropical environment.

For those concerned that this new herd could replace or compete with the northern Australian industry, fear not, Indonesia has probably lost more than 2 million breeders during the last 3 years of feeder cattle import restrictions. At maximum speed, northern Australia could export perhaps 100,000 breeding heifers per year to this market. By the time the palm plantation herd reaches 1 million head in a very optimistic minimum of 10 years time, the expanded Indonesian population will have swallowed up all of this potential production and more through increasing domestic consumption alone.

It’s not a matter of if integration of palm oil and cattle will become a serious business only when.