The market continues to be depressed by the wall of cattle being presented to the butchers as the 81,000 head imported in October exerts its full influence.

Fat steer prices range from Rp39,000 to Rp41,500 with even lower prices for longfed animals. I have used Rp39,500 as the indicator rate for January with expectations that this rate will fall again next month as the October flood continues its slow progress to market.

It may take well into March until the October imports are fully eliminated from the feedlots.

This depressed market sentiment combined with the seasonal price rises for feeders in Australia has led to a low January import number of close to 30,000.

At the time of writing this report in the first week of February, it looks like being a very quiet import month as the monsoon is just in the process of arriving in northern Australia.

With major flooding in the cattle port city of Townsville and wet conditions in the top end of the Northern Territory, supply will be limited with logistics severely restricted and prices on the rise.

Peak demand during this festival period is the last 10 days of Ramadan and the first few days of Lebaran.

An average feeding period of 120 days means that feeder cattle need to be imported at the beginning of Febrary to meet the peak market at the end of May.

My most recent report of northern Australian feeder prices indicated that AUD$3.25 was about the money but this was just prior to the heavy rainfall events.

If the rain continues, this rate could easily pass $3.50 with $4 an easy mark when the drought is finally broken. If February produces the very low import numbers seen in January the supplies available at the end of May will be severely restricted with great pressure for price increases of fresh beef.

It is interesting to note that for the first time in decades, the price of imported live cattle ready for slaughter in Indonesia is now consistently the lowest in the region. And all of the other markets have been importing unlimited quantities of Indian buffalo beef for many years. It seems that importers only have themselves to blame as hugely excessive imports during July, August and October appear to be the primary factor causing the current market pain.

On a brighter note, importers are breathing a sigh of relief as the government seems to be in no hurry to take action against those who have failed to meet their 1 to 5 breeder to feeder import requirement.

The best (and most optimistic) advice that I have is that the government won’t act until the individual importer annual import permit allocations have been fully utilised.

As I understand it, the majority of importers commenced their annual import permit process in the third quarter of the calendar year, therefore, if the government intends to wait until the annual permit cycle ends before taking action, the majority of importers can continue to operate normally until at least July and possibly as late as September.

This outcome no doubt suits the government as it means it will not result in any bureaucratic restriction of imports prior to Ramadan and Lebaran and will also push the decision back to a date after the upcoming general election on the 17th of April 2019.

For the first time in Indonesian history, the President, Vice President and members of the People’s Consultative Assembly will all be elected on the same day by more than 190 million eligible voters.

Northern producers can also relax as this delay until the third quarter also avoids any drastic reductions in demand until after the 2019 seasonal marketing cycle.

As the national herd forecast shows below, total numbers will be at their lowest from 2019-2021 so producers will be shielded from any potential reduction in imports to Indonesia during 2020 by a severe shortage of supply regardless of whether the drought breaks or not. 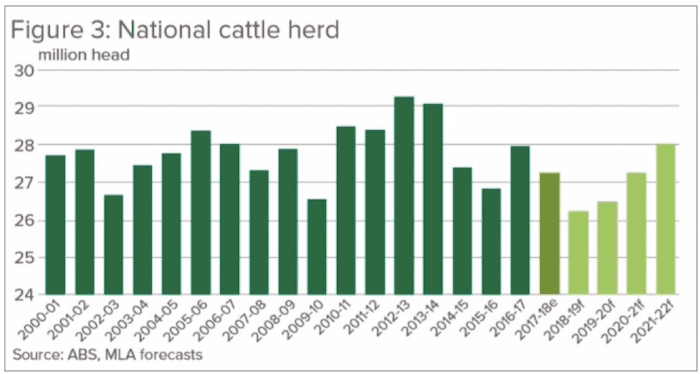 Strong demand and supply continue across Vietnam as the Tet New Year festival period approaches (2nd to the 10th February).

I have lifted the indicator rate for slaughter steers from Dong71,000 to Dong 72,000 this month to recognise the strength of the higher priced northern market. January saw the 100,000 feedlot capacity increase from 70 to 80pc as importers stocked up for the holiday period.

The significant news for this month is that negotiations are now well advanced to allow Vietnamese importers to receive live cattle from Brazil.

My sources suggest that while there is still some final processes required to complete the negotiations, the first shipment might arrive as early as mid 2019. Similar negotiations with Malaysia could reduce the logistics burden of one country taking large shipments at once as two or three port discharges for very large vessels is not a deal breaker. Photo taken by Lach MacKinnon just south of the Parana river in southern Brazil : feeder steers that would do the job nicely in Vietnam or Malaysia.

There has been little change in slaughter cattle rates during January despite the red meat market disruption caused by the ongoing African Swine Fever (AFS) outbreak. As Simon Quilty reported in mid January, the full impact on pig numbers will take quite some time to work its way through the production system so it might be 2020 before the national pig population hits the bottom and exerts maximum disruption on the meat markets both in China and elsewhere around the world.

The recent NACC shipment of slaughter cattle from Port Alma in Queensland to northern China was perfectly timed to provide product for this year’s Chinese New Year festival which runs from the 5th to the 19th of February 2019. It is a timely demonstration of how the difficult and complex export health protocol can actually work in northern Australia as these cattle were delivered to northern China where the weather is too cold for the Bluetongue insect vectors to survive.

Changes still need to be made to the protocol to ensure that trade can continue in a normal fashion i.e. not only is there a requirement that the entire shipment is processed in 14 days but Quarantine then requires that the abattoir holding yards to be empty for 30 days before the next shipment can arrive. Clearly these issues are a restriction on trade rather than a disease risk management measure.

When China decides to remove these trade restricting factors from this protocol the producers, exporter and ports around Australia will be kept very busy with the demand for live cattle. With the initial focus being on slaughter cattle, Port Alma is very well placed to provide an excellent service to this specialist trade. Photo from George Black : Chinese street market in Rongcheng, Shandong Province, northern China. Temperatures at zero or below so no need for refrigeration. Photo from George Black : Aussie “Four Brothers” brand (Teys Brothers) vacuum packed Shin Shank in a Rongcheng supermarket selling for Yuan104 or AUD$21.35 – not bad for shin beef! In the same supermarket Aussie cube roll was selling for $99 per kg. Another great photo from George Black in northern China where their big black donkeys are in high demand for their beef and their hides once they have finished their duties as draft animals. Their meat sells for prices similar to beef at around AUD$12 per kg. The hides are highly prized for their medicinal uses.

The peso rate for slaughter cattle has risen this month to Peso165 per kg live weight (from 157 last month). My agent in the Philippines tells me that this is due to simple lack of supply as buyers continue to show strong demand for fresh beef while the local cattle herd simply can’t keep up. The ongoing strength of the Philippine economy is no doubt the major factor driving this.

Thai slaughter cattle prices remained fairly steady during January with the increase in the AUD rate above mainly driven by the stronger Baht.

While I was back in Australia for a Christmas break I visited a large number of supermarkets to see what was on offer in their beef departments.

. In almost every case, Woollies appeared well stocked and presented while Coles were almost always understocked, messy with generally a lesser volume and range of product.

It seemed to me that the management at Woolworths were carnivores while those at Coles were vegetarians but of course this is a purely subjective observation on my part. Have a look for yourself and make your own judgement. Woolworths in Darra, a suburb of Brisbane. Coles in Jindalee, a suburb of Brisbane (not far from Darra).