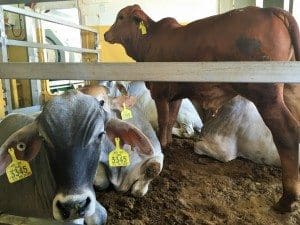 A picture of cattle on board MV Ocean Outback, taken on Wednesday, Jan 6.

Livestock exporters and Government authorities are working on contingency arrangements to determine a new destination for several thousand cattle and sheep still on board the broken-down livestock carrier MV Ocean Outback.

The vessel experienced a mechanical failure in one of its two engines soon after departing Fremantle for Israel on Tuesday, December 29, 2015.

The stock have remained on board the vessel for the past 10 days following its return to a wharf near Fremantle for repairs.

Otway Livestock Exports issued a statement today reporting that the cattle and sheep remain healthy and well cared for.

The company’s managing director Alan Schmidt said the vessel will no longer travel to Israel as originally intended.

Otway Livestock Exports can confirm that the cattle and sheep on board the MV Ocean Outback remain healthy and well cared for while the vessel has been docked at Henderson, south of Perth, in recent days.

Otway managing director Alan Schmidt said both his company and Wellard are continuing to work with State and Federal government agencies in implementing contingency arrangements now that the vessel will not travel to Israel as originally intended.

“We are working hard to finalise our contingency arrangements and, in doing so, will continue to work with the relevant agencies to ensure all necessary regulatory and commercial arrangements and procedures are in place as soon as possible,” Mr Schmidt said.

“We understand that there is some community concern about the welfare of the livestock on board the vessel and we are doing all that we can to ensure that welfare is not compromised while contingency arrangements are finalised.

“Additional veterinary and welfare oversight of the cattle and sheep has been undertaken by a Department of Agriculture veterinary officer conducting daily inspections of the livestock, which is in addition to the Australian Government-accredited veterinarian and fully qualified stockmen who are part of the ship’s crew.

No animal welfare concerns have arisen from these inspections,” he said.

Mr Schmidt said the vessel’s feed, water and ventilation system has not been affected by the engine issue. Fresh water supplies have also been provided from on-shore. The advanced ventilation system on the livestock decks distributes an average of 110 air changes per hour, which is four times the Australian standard for livestock vessels and 3.5 times the number air changes per hour on a commercial airliner.

“The MV Ocean Outback can operate on one engine and yesterday it was taken 50km out to sea for a ‘wash down’ to remove faecal matter which has built up over recent days,” Mr Schmidt said.

“In keeping with the regulatory standards for the export of live animals, we will continue to work with the all government agencies. Furthermore, when the vessel returns to Henderson from its ‘wash down’, we will be facilitating an inspection of the livestock on board by RSPCA WA representatives.”