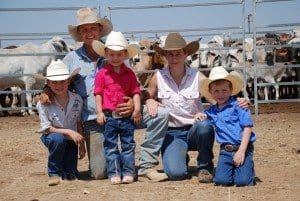 Dougal and Emily Brett with their children William, Sophie and Lachlan at Waterloo Station.

The 40 year old husband and father of three from Waterloo Station west of Katherine died in a Careflight plane enroute to the Royal Darwin Hospital early yesterday afternoon after the R44 helicopter he was flying crashed into a riverbed near Timber Creek about 11:30am.

Mr Brett and his wife Emily co-owned the 2000 square kilometre, 20,000 head Waterloo Station with his parents Colin and Alison and brother Hamish, a veterinarian.

The family moved from Northern Queensland to Waterloo Station after buying it from Wallco Pastoral Company in 2004 and have since become integral and highly respected members of the Northern Territory cattle industry.

In addition to their cattle operations Dougal also ran a livestock transporting business and was a mustering pilot.

Dougal and Emily became the faces of the northern cattle industry in the aftermath of the 2011 live cattle export ban to Indonesia, having the courage to share the story of the impact and featuring in numerous news reports and television programs on behalf of other producers and businesses effected by the ban. 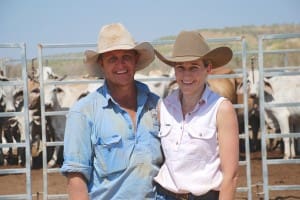 Emily and Dougal’s Brett Cattle Company is the lead applicant in the still-yet-to-be-resolved live export class action filed against the Commonwealth in October last year.

“It is an enormous loss to his family and to the northern industry,” Ms Hayes said.

“I think Australians feel like they know the Brett family and have grown to love them through their journey with the live export ban.

“People feel connected to their story and very much feel what they are going through.”

She said the NTCA had been inundated by calls this morning from people from all over Australia who felt like they knew the Brett family and wanted to pass their best wishes on to them.

“He was an active member and very supportive of the industry, Ms Hayes said.

“The reality is that he just worked very hard, if he wasn’t flying his helicopter he was driving road trains.

“He was a very funny guy, very jovial and a much-loved character.”

The Australian Transport Safety Bureau and the Civil Aviation Safety Authority is investigating the cause of the crash.