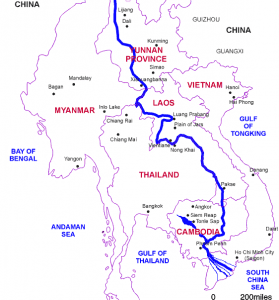 Map showing the path of the Mekong River from Vietnam and Cambodia to China.

Cambodia will soon be the latest market to open for Australian feeder and slaughter cattle.

The market is expected to be relatively small initally with an anticipated volume in its first year of 10,000 head, which on 2013-14 figures would position it as Australia’s 10th largest export market.

However like neighbouring Vietnam, which has grown from exporting just 3000 cattle in 2011-12 to 131,000 in 2013-14, Cambodia is one of several markets in South East Asia where rising demand has reduced local beef cattle herds which is considered to have export growth potential.

Negotiations to expand Australian cattle exports into Thailand are also progressing, while China in particular stands as a market of significant growth potential if Government to Government discussions currently underway between Australia and China can secure the necessarily protocol agreements.

Agriculture Minister, Barnaby Joyce, said Cambodia was the fourth livestock export market which the government has negotiated access into since February.

“This government is serious about delivering greater market access for our agricultural producers, including cattle producers many of whom are doing it tough at the moment because of drought,” Minister Joyce said.

“Opening new markets, and improving access to existing ones, are tangible ways government can help our farmers get a fair price for the work they do.

Minister Joyce said the Australian and Cambodian government veterinary authorities reached agreement on animal health certification requirements which has opened the door for the start of trade in feeder and slaughter cattle between the two nations.

“Getting the groundwork right for any new market can take time but I anticipate trade will start soon.

“Industry estimates that about 10,000 head of cattle may be traded initially and that there is a good prospect of future growth in the trade.

“I am proud to say this is the fourth market I have opened in six months.

“Commercial support has already resulted in a re-start of trade with Bahrain and Egypt and I expect shipments will follow in coming months to Iran.

“With a good shower of rain and new markets, better prices are to be expected.

“This is all about ensuring government creates the conditions for trade  which then allows commercial parties to take advantage of these increased opportunities,” Minister Joyce said.

Northern Territory minister for Primary Industry and Fisheries, Willem Westra van Holthe, has welcomed the news and praised the Commonwealth on reaching the agreement.

“This is great news for Northern Territory cattle producers and all those involved in the live export trade,” Mr Westra van Holthe said.

“The Northern Territory Livestock Exporters Association and LiveCorp have been instrumental in opening this new market.

“I must also commend our Federal Minister for Agriculture, Barnaby Joyce, who has been working tirelessly to open new markets for primary producers.

“Now that the formal agreement has been reached I will soon be visiting Cambodia to cement our relations there and look at potential expansion of the market.

“The new trade to Cambodia will not start overnight but we are hopeful that trade will commence soon.

“Again, this is fantastic news for our pastoral industry. However, the benefits of this new market will flow on beyond just our pastoralists. From the ringers who work with the cattle on the land right through to our port workers who help load the cattle on to the export ships, the more we export, the better it is for every Territorian.

“I am proud of the work the Government is doing to support the Territory’s pastoral sector. By opening new markets and expanding existing markets we are providing the right framework in which the industry can flourish.”