An aerial view of TUM’s 48,500 head cattle feedlot surrounded by rice paddies at Tanjung Burung near Jakarta. Concrete pads are already in place for a planned expansion can be seen on the left of the picture. Image: Beef Central. Click on pictures to view in larger format.

Uncertainty over cattle import permits is the only factor preventing a number of Indonesian cattle importing and lot feeding companies from proceeding with planned feedlot expansions.

The TUM cattle company owned by brothers Buntoro, Pudjantoro (PJ) and Sanko Hasan and their families is one company considering a major expansion to its cattle feeding business, which includes two feedlots in Jakarta. 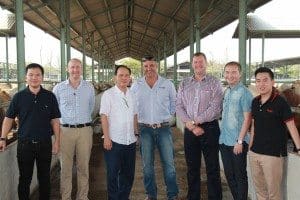 Their largest feedlot at Tanjung Burung (pictured above) rivals the largest feedlots in Australia for size at 48,500 head, while the second at Selapajang has a capacity of 7500 head.

The Hasan family’s strong relationship with the Australian cattle industry draws back to 2001 when they imported 100 Brahman steers from northern Australia to trial in their feedlots.

The family has since imported and fed more than one million Australian cattle in its two Jakarta feedlots, which supply finished cattle to wet market butchers throughout Greater Jakarta and across Western Java. 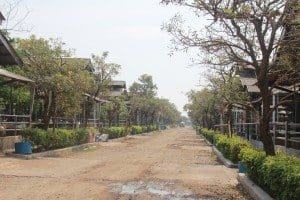 Cool breezes from the nearby Java Sea, which is just a few kilometres away, waft over row upon row of Brahman and Brahman-cross cattle from northern Australia standing and lying in pens which are cleaned daily.

The Hasans say they have always placed a high priority on building strong relationships with their partners at both ends of the value chain: with the Australian exporters and cattle producers from whom they source their imported cattle and with the many market agents and butchers who buy TUM-raised beef to sell in their wet market stalls.

You only need to look as far as the office wall in TUM’s main feedlot to understand just how importantly the Hasans treat their relationship with Australia. Framed, enlarged photographs of the Hasans with numerous Australian visitors to their feedlot cover almost every inch of available wall space.

Their location near Jakarta means the TUM feedlots have become a popular port of call for Australian government and industry groups visiting Indonesia. 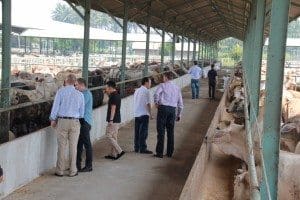 Buntoro Hasan says the family welcomes the opportunity to show how their feedlot works and to share information with Australian producers.

“We are grateful, we like to do that, we want to have a good relationship between Indonesia and Australia,” Buntoro said.

As we drove around Tanjung Burung’s green, leafy laneways last week Buntoro said Australian producers who visit sometimes express surprise at what they see. “It gives them a good feeling to know that their cattle are coming here,” he said. 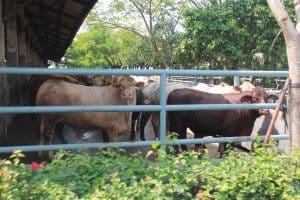 Australian cattle on feed at the Tanjung Burung feedlot.

With Indonesia’s middle class projected to soon reach 100 million people, there are strong expectations that demand for protein, particularly beef and chicken, in Indonesia will grow too.

The Hasan family shares the optimistic outlook for Indonesian’s cattle industry and has plans already drawn up to expand the size of its largest feedlot at Tanjung Burung.

But the one factor preventing the development from going ahead at this point is the continued uncertainty that surrounds the future of cattle import permits in Indonesia.

“If the permit is opened, we can make very fast construction, we have the designs and we have the land.”

The Tanjung Burung feedlot offers a simultaneous glimpse into both the past and the future of Indonesia’s economy. 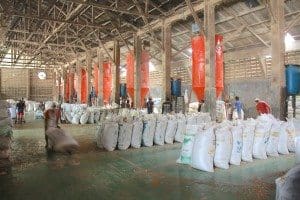 The old – Rations being fed into bags for manual distribution in the feed shed. 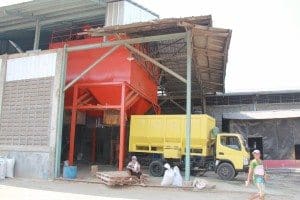 The new – the newly installed feedmill at Tanjung Burung feedlots.

In the older parts of the feedlot, rations are still manually fed out to cattle in bags weighing up to 80kg by teams of lean, whipchord-fit local workers. They have wheel barrows if they want but most still prefer to haul the bags physically.

But with minimum wages and the cost of labour increasing, new additions to the feedlot have been designed to allow bulk feed to be distributed by trucks directly into feed bunks. A new feedmill has recently been installed and is currently supplying out about 10pc of the daily ration, but will play a much greater role in supplying the new expansion if and when it goes ahead.

Imported cattle enter the TUM feedlots at an average weight of 300kg, and are fed for 120 days through to a slaughter weight of 460kg.

The margins of cattle importers and their butcher customers are being squeezed between the higher purchase price for Australian cattle at one end and the resistance to price increases in Indonesian wet markets at the other end. The Indonesian Government does not want wet market beef prices to rise above current levels of 95,000-100,000 IDR/kg. 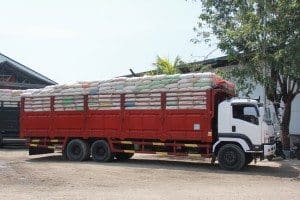 Wilson said consumers were not willing to pay above that level for beef, and butchers were afraid to increase their sale price for risk of losing customers and consumers opting for less expensive chicken over beef.

“For every 1000-2000 IDR/kg that they increase they lose their customers,” Wilson said. “Competition is very aggressive so they just maintain the price and they take a lower margin.

“The whole chain gets affected, it means we also make much less margin per head.” 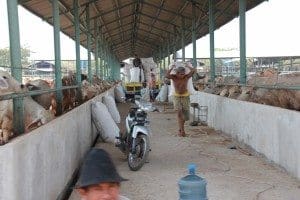 Indonesian importers are hopeful that the momentum of economic growth in Indonesia builds and in turn encourages more consumers to buy beef and to also pay a higher price for it.

Forecast annual GDP growth in Indonesia has eased from previous rates of close 6-7% per annum to around 5-5.5%, largely because of the impact that a downturn in demand for Indonesia’s major export of coal is having on the country’s economy.

Reflecting the more subdued economic climate, car sales in Indonesia have eased by around 30pc year on year and motorbike sales are down 20pc year on year.

“That is an indication that people are less willing to spend, they are waiting and seeing,” Wilson said. 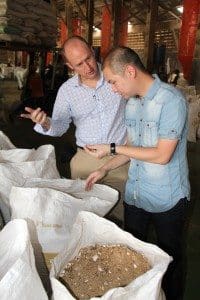 In the meantime the family like others in the Indonesian cattle import industry are watching the permit situation closely.

No one knows what the Government will do in relation to import permits in future, but the family is taking some heart from recent comments by the newly appointed Indonesian director general for agriculture that self-sufficiency in beef production is a goal that should be planned over 30 years.

Government level recognition of the ongoing need for cattle imports to maintain an affordable supply of beef for Indonesian customers would help to give both Australian producers and the Indonesian feedlot industry much needed stability and security for their businesses. 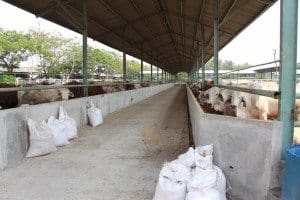 The newer additions to the feedlot have been designed to allow feed trucks to distribute feed in bulk directly to bunks, but manual feeding is still being used as the feedmill is integrated into the operation.

Click on images below to view pictures in larger format