Heavier weights could take some digesting for Indonesian cattle importers 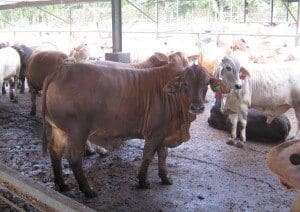 Steers on feed at Elders’ Lampung feedlot in Indonesia.

A new policy that allows heavier cattle to be exported to Indonesia has mixed implications for Indonesian cattle importers and lot feeders, a critical link in the Australian-Indonesian beef cattle supply chain.

Importers say they will work to embrace the regulation, particularly if it manifests into lower feeder cattle prices.

However, some have privately expressed concern about potential ramifications for their sector if the new policy fails to quickly lower prices in Indonesian wet markets, as their Government appears to expect it should.

They are also concerned about the market’s ability to handle heavier weight animals, given they must still by law feed imported cattle for a minimum of 120 days (more on this below).

Public statements by Indonesian Government Ministers and officials indicate the Government has a high expectation that the new heavier weight policy will translate into significantly cheaper cattle and in turn much lower beef prices for consumers in Indonesian.

However, while the new policy should help to improve supply of beef and reduce the cost of beef to Indonesia, the measure alone is unlikely to deliver dramatic price reductions anticipated.

All weight categories of cattle in Australia are in short supply, relative to domestic and international beef demand, and remain at cyclically high prices.

Everything the Indonesian Government has tried so far to reduce the price of beef – in particular importing big tonnages of cheap, frozen Indian buffalo meat in the past six months, and forcing importers to buy in breeding cattle (a longer-term policy and one that is causing importers significant angst – more on this below) has not yet succeeded.

Australian livestock export industry leaders continue to reiterate it that it will take time for the benefits of the increased weight ranges to flow through the system.

However, if the new policy fails to deliver a fast decreases in Indonesian beef prices, some importers fear the Indonesian Government will again accuse their sector of manipulating the market.

As beef prices remain stubbornly high, the Indonesian Government is facing mounting pressure to deal with the problem.

Last year it attributed continued high beef prices not to the shortage created by years of restrictive import quotas that have curtailed supply in the market, but rather on cattle importers manipulating supply for their own benefit, and collectively fined them millions of dollars.

This week, with pressure to fix beef prices mounting, Indonesian Government is now targeting frozen beef importers, alleging that they have been avoiding taxes. It has launched a comprehensive investigation and says it will revoke importer licenses if they are proven guilty.

How will 120 day feed requirement play out with heavier cattle?

Meanwhile the new regulation that increases allowable weights of imported cattle from a 350kg average to a 450kg average presents another challenge for exporters.

Under current Indonesian law, imported cattle must be fed in feedlots for a minimum of 120 days. This is meant to ensure maximum value-adding of imported cattle occurs in Indonesia and benefits the local economy.

While the Indonesian Government has increased the allowable weight limit for imported cattle, it has not reduced the four-month feeding requirement.

Feeding a heavier 450kg animal instead of a lighter 350kg animal for 120 days will obviously result in a much heavier and fatter 550-600kg animal hitting the market, which is outside what wet market butchers and their customers prefer and likely to result in importers receiving discounts for their finished cattle.

Ramadan starts in June, less than four months away. Heavier cattle imported in coming weeks will not be available in time for the peak beef demand period, if they have to be fed for 120 days as per existing Indonesian law.

“There is still a minimum 120 days fattening law for every feeder we import that we have to comply,” one lot feeder explained to Beef Central.

“The 450kg maximum weight is only a ministerial decree. Breaking the law has a lot bigger consequences.”

Whether authorities will turn a blind eye to the 120-day feeding requirement to ensure there is enough beef supply available for Ramadan is a key question for importers.

Feeder cattle are currently at trading loss for Indonesian lot feeders. The heavier the feeder cattle, the bigger the loss. To offset this, lot feeders have to focus on trying to improve their feeding margin by feeding cattle for longer.

Lot feeders have explained to Beef Central that the heavier animal will likely cost more to feed.

“Not only does cost of production increase, but our past experience shows that some of the issues we had with the bigger animals are huge shrinkage, longer recovery period, and also lower meat yield,” one said.

‘Five plus one’ breeder protocol issues

Another serious and challenging issue for Indonesian lot feeders is the new requirement to import one breeding animal for every five feeder animals they buy in.

Given the time it will take to earn a return from these breeding animals – some 2-3 years – the concern is that the new policy will quickly cannibalise their available working capital.

This is how one lot feeder explained it: “If we are running on a 120 days (four months) fattening cycle, that also means that we have a four month cycle for working capital.

“Every cycle we will reduce 20pc of our four month fattening capital and convert that to a breeding capital which will hold it much longer, at least for three years before we sell the first feeder born from the breeder.

“Meanwhile we will already ran out of our capital and might have problem feeding the breeder in the feedlot as we have no expertise at all on breeding.

“This is the very serious issue that we are facing now that if we cannot find a way out this might be the end of Indonesian feedlot with import feeder as this rule only apply for import.”

The same lot feeder said Indonesian banks had already confirmed they would not fund the breeding program as the return is much lower than their interest rate and importers and lot feeders are not experts at cattle breeding.

“The audit of the 1 breeder for every 5 feeder rule will be at the end of 2018, meaning we have almost two years to make our survival or plan an exit strategy.”

The recently announced suspension of Indian carabeef imports is no longer in place, meaning it is business as usual for that trade, cattle importers have reported this week.

However, some high level efforts to overturn the policy are still underway.

A House of Representatives commission covering agriculture and food affairs has called on the Government to revoke Indian buffalo meat imports, saying they are unconstitutional and illegal.

For many years Indonesia only allowed beef or cattle to be imported from countries which were entirely free of Foot and Mouth Disease (FMD).

India has FMD, but the door was opened for Indian buffalo meat to be imported into Indonesia under a Presidential Decree issued in 2016, which allowed Indonesia to import beef or cattle from FMD-free zones within countries that might otherwise have FMD. Under the regulation, countries from which Indonesia can import are supposed to have an official FMD control program recognised by the World Organisation for Animal Health (OIE).

The 2016 presidential decree includes a clause that allows for Indian meat to be imported as a maximum-security measure to help increase beef supply in an emergency situation (which the Government argues the current beef shortage and high prices constitutes).

The Parliamentary commission wants this “maximum security” clause to be revised or removed, because it says it is outside what was agreed upon with the government when the livestock legislation was drafted back in 2014.

The commission’s concern is about the potential entry of FMD into Indonesia via Indian buffalo meat.

“We assess the import of meat from India was not in line with the Act that created the House of Representatives and the government, so there needs to be revised,” Commission IV vice-chairman Khaeron Herman said, according to Jakarta’s Tribune News.

In the meantime imports continue. The same article said Bulog is importing buffalo meat ahead of the anticipated surge in demand for Ramadan, and expects to import 21,000 tonnes of Indian buffalo meat by the end of this month.