The grand opening of the 10th China Cattle Development Conference.

The conference is one of the Chinese cattle industry’s major annual events, and attracted more than 600 Chinese delegates including local beef and dairy farmers, lot feeders, processors, cattle importers and industry experts. 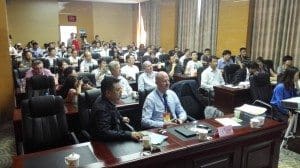 Australian delegates among the audience during a seminar focusing on the ChAFTA. Click on image for a larger view.

One seminar held during the conference was dedicated to Australia’s cattle industry, where Austrade’s Chinese based trade commissioner Jeff Turner and business development manager Chuck Yang delivered presentations on China-Australian trade relations and how the China Australia Free Trade Agreement will affect the cattle industry.

They were joined by MLA and Australian cattle experts, discussing future demand for Aussie beef, the just approved feeder and slaughter cattle protocols, as well as agricultural investment.

“The Chinese industry experts and farmers were very interested in how Australian beef feedlot experience can be applied in China,” Mr Turner told Beef Central.

“Many of the delegates had attended Beef Australia in Rockhampton in May this year, and reported several commercial deals covering chilled and frozen beef, live cattle and cattle technology and services.  One major announcement is the JV between Wellard and Fulida, for beef and live cattle.”

Mr Browning said the announcement “certainly created a lot of energy” among the delegates and discussion between exporters and importers.

“There was a broad cross section of cattle breeders, feedlots and processors of all size, including importers who have participated strongly in the breeding market to date, and are now eyeing off the slaughter market opportunity,” Mr Browning said. 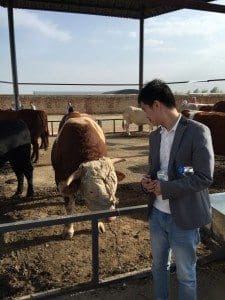 While the energy was high and the market prospects look strong, Mr Browning said there was still some uncertainty as to how the protocol will be interpreted at the Chinese end.

For example, it is understood that China has included restrictions in its Standard Operating Procedures to importers that will only allow imported cattle to penetrate 100km inland from Chinese ports before they have to be fed and slaughtered.

The trade is still seeking clarification on this requirement, but, if true, it would potentialy rule out a significant amount of current cattle industry infrastructure owned by importers within China and possibly prevent them from being able to receive Australian cattle.

Another important unresolved issue is how China will define the active and inactive Bluetongue Virus (BTV) zones within China itself. That detail has significant implications for the trade from northern Australia in particular. Cattle exported from the northern Australia BTV zone to Southern China must undergo 60 days in pre-export quarantine before export, while exports from northern Australia to northern China only face a 7-day pre-export quarantine requirement. Therefore where the line is drawn that determines the location of the northern and southern BTV zones in China will have a big bearing on the commercial viability of exports from the north.

Industry sources have told Beef Central that they believe China will set their BTV zones according to meteorological data based on frost prevalence, but at present exporters are engaged in technical discussions in a bid to better understand what is required to comply with the protocol.

Mr Browning said he believed the trade will open up predominantly with cattle from southern Australia, comprising HGP-free British and British Euro cross steers and heifers in the 450-550kg slaughter weight range.

However, he said that for China to receive the volumes of cattle it has indicated it needs, exports from northern Australia will be needed as well.

“For the trade to be sustainable sooner or later it will need to migrate to exports from the north,” Mr Browning explained.

“I think it will open up in the south, but if the Chinese want sustained significant numbers, which we believe they do, then we will need to have a clearer understanding of how the protocol is going to apply to the north in practical terms.”

The volumes China imports under the new slaughter protocol will ultimately come down to whether Chinese importers can afford to pay more than other markets for the cattle they require.

China is a longer shipping distance from Australia than the large markets in South East Asia where Australian live exporters have existing strong relationships with feeder and slaughter cattle importers, and its protocol is also stricter than the markets of SE Asia.

These factors add support to the consensus that China is likely to start with small volumes of cattle and potentially grow over time, rather than starting with explosive growth from the outset.

Beef Central understands that one importer has been issued an import permit to deliver the first consignment of slaughter cattle from Australia to China via air-freight to signify the opening of the trade, but import permits for larger sea-freight consignments are yet to be issued.