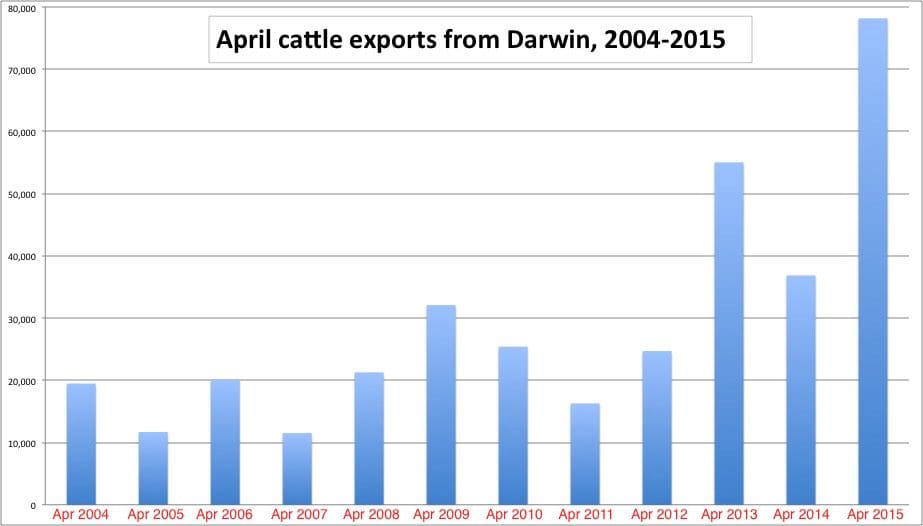 The rush to supply second-quarter cattle to Indonesia in time for the country’s peak Ramadan/Labaran demand period in mid-July resulted in a massive April for cattle shipments from the Port of Darwin.

The Port usually ships an average of 26,000 cattle during April, the first month of the second quarter, however exporters shipped 78,128 head from the port in April 2015, according to figures obtained from the Port of Darwin.

The port of Townsville exported 22,000 for the month.

The North Queensland port is now on track to ship a record 260,000 cattle this financial year.

By the end of April it had already exported 207,000 cattle, surpassing last year’s record of 201,810 cattle with two months left before the end of this financial year.

A Port of Darwin spokesperson said 20 vessels had been shipped from the port during April.

A large number of cattle shipped during April were forward purchased by exporters during the first quarter for prices of around $2.70/kg liveweight delivered Darwin.

Industry sources have told Beef Central in recent weeks that prices for new orders have eased with the strong supply of cattle currently available to $2.40/kg-$2.50/kg in Darwin and $2.15/kg-$2.20/kg delivered to Cloncurry and Townsville.