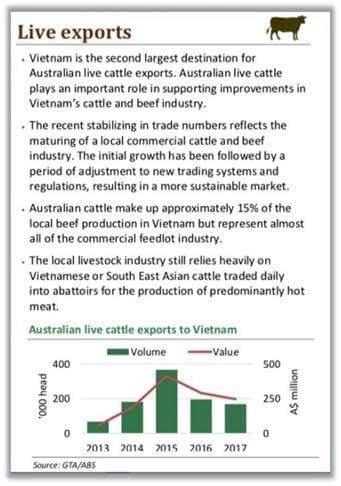 Vietnam is Australia’s second largest cattle export market but one that has been plagued by ongoing welfare problems. In 2016 the Australian public was outraged when footage emerged showing cattle being flooded with water from garden houses to increase their weight and sale-return prior to slaughter, and sledgehammering of animals to death.

In an apparent acknowledgment that welfare standards in Vietnam are still not being satisfactorily upheld, Federal Agriculture Minister David Littleproud last month announced a new $950,000 training package designed to improve training of workers in Vietnamese abattoirs that handle Australian cattle.

The industry has also been alive with rumours in recent weeks that more damaging footage from Vietnam is being prepared for release during next week’s triennial industry showcase event, the Beef Australia expo in Rockhampton. Whether that eventuates is yet to be seen.

Following a meeting earlier this week exporters have announced a decision to adopt further animal welfare measures in the market.

“ALEC and our exporter members continue to improve our mitigation of the risks associated with our maturing Vietnamese supply chains. We’re committed to stronger welfare, control and traceability safeguards to uphold ESCAS standards in Vietnam,” Mr Westaway said.

Mr Westaway said endorsement of these initiatives by exporters at meetings this week demonstrated they were committed to achieving ongoing improvements in its overseas markets.

“Especially over the past 18 months, our industry has invested in substantial research into the challenges of livestock supply chain control and traceability in Vietnam and, importantly, determining the best collective response to those challenges,” Mr Westaway said.

“The community has rightly demanded change of the industry to strengthen animal welfare assurances. The measures endorsed this week by exporters confirm our industry’s ability and willingness to deliver on that expectation and drive the necessary changes.”

“The findings of industry research into control and traceability have been applied swiftly, and not just in Vietnam. Exporters have determined that the recommendations should be incorporated via the Livestock Global Assurance Program in all feeder and slaughter markets.”

Mr Westaway said the industry’s endorsed approach would substantially improve both the focus and outcomes in relation to control and traceability within the auditing framework.

“Exporters know there is more work to be done to strengthen transparency and accountability in the live trade,” Mr Westaway said.

“Lasting change cannot be achieved overnight, but our commitment to ongoing welfare improvement in our supply chains and our responsibilities as a leader in the global livestock export trade is a long-term proposition.”