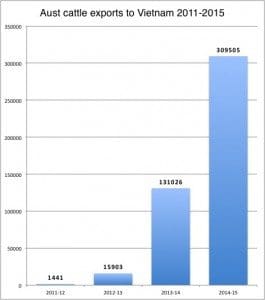 Vietnam has been one of Australia’s fastest growing export markets for live cattle, but also one of its most challenging.

Exports to the country rocketed from just 1441 cattle four years ago to more than 300,000 cattle last financial year (see graph).

However not all customers in the rapidly growing market were fully on board with the requirements of Australia’s live export welfare system ESCAS, which saw some Australian cattle onsold to higher-paying buyers outside approved supply chains and exposed to cruel treatment.

The leakages at the time were self-reported by exporters, and later by Animals Australia, and led to all exporters making a commitment to adopt six additional welfare standards over and above the requirements of ESCAS (as outlined below this article).

Northern Territory Livestock Exporters Association chief executive officer Stuart Kemp was involved in the meetings and said there was a strong commitment from all parties to ensure welfare standards are upheld.

In contrast to the early phase of the market’s growth, a “second wave” of investment was now underway, Mr Kemp said.

“I think there is a very exciting 12-18 months in front of us as we see this second wave of investment come online,” Mr Kemp said.

‘They are discovering now that it is a long-term game, not a short-term game”

“Those that went in early thought probably there was an opportunity but they are discovering now that it is a long-term game, not a short-term game.

“We will see that those who are not fair dinkum will fall by the wayside and those who have done more research and have invested in a more sound and secure way will come to the fore.

“That second wave of entrepreneurs and business people are learning from the mistakes of the first wave, the feedlots we visited and meatworks under construction are a lot better.”

Mr Kemp said exporters had spent millions of dollars in the past six months to implement the additional six-point welfare plan, and the investment was making a clear difference.

“It has been a massive investment, not just in terms of technology such as CCTV, but in more people on the ground, and extra sets of eyes.

“There have been extra reports because of those investments. Every time you see a new problem you take steps to rectify it and that is happening.”

Mr Kemp said Vietnam was an exciting market with a lot of potential going forward, provided Australia did not price itself out of the market.

The fundamental dynamics of strong export demand and short supplies of suitable cattle have forced feeder steer prices at Darwin well above 300c/kg, with isolated sales as high as 350c.

“Most of us (in the export sector) have a producer background and we understand what it is like trying to make a living out of selling cattle, so we’re excited for producers to get this rare opportunity where the stars align and they get a few bob in their pocket,” Mr Kemp said.

“There are people in the market permanently who think Vietnam is certainly a 300,000 head per year market going forward, but it may not be the case while prices are a bit higher as they are at the moment.”