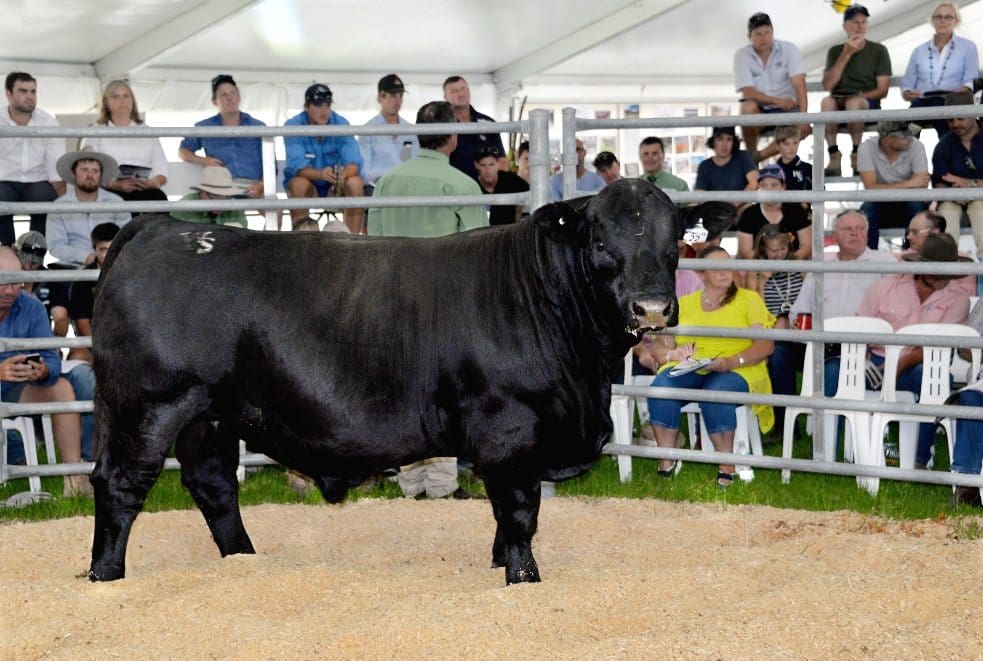 Highest bull price so far in 2018 has been $52,500 paid for Woonallee Messiah M170, the new Australian Black Simmental record priced bull, pictured in the ring at Woonalee’s recent sale near Mt Gambier.

DESPITE the year-on-year decline in slaughter cattle prices and softer trend in this year’s Autumn weaner sales, Autumn 2018 bull sales held so far in southern Australia have held up remarkably well.

This time a year ago, the Eastern Young Cattle Indicator hovered around 640c/kg carcase weight, whereas it has settled at around 545c/kg this week, representing a 15 percent decline. A similar correction has been seen in average bull prices over the past couple of months.

The results for 115 Autumn bull sales recorded this year by Beef Central have shown a small decline in average prices so far, compared to the stellar Autumn bull sales in 2017. But importantly, bull prices are still strong compared with the previous ten years.

Leading the average prices for the Angus breed were two West Australian herds. Koojan Hills, now owned by the Metcalfe family at Manypeaks averaged $10,208 for 65 bulls and Coonamble stud at Bremer Bay averaged $10,100 for 80 bulls, with a complete clearance for the Davis family.

Top prices for Angus did not hit the heady heights of autumn last year, but there were still some impressive tops. Landfall Angus near Launceston, Tas achieved the highest price of $37,000 in a very strong sale completed this week, where 140 of 155 bulls were sold for an average of $7414. This compares with an average of $8884 for 142 bulls in 2017.

Lawsons Angus held three sales over the Autumn selling season. The first at their Hopetoun property near Esperance, WA sold 93 bulls for a top f $31,500 and $7580 average; the second sale at Cataby north of Perth, WA sold 55 bulls averaging $6230; and the third sale at Yea, Vic sold 149 bulls averaging $7010 in a complete clearance.

Simmentals led the averages for the European breeds so far this autumn, with an overall average of $7423 for 341 bulls in eight sales across southern Australia.

Again leading the way was the Woonallee Simmental stud, Furner, SA which sold bulls topping at $52,500 and averaging $9287. Not far behind was Bonnydale Simmentals which averaged $8770 and topped at $19,000 for 65 bulls.

The Charolais breed averaged $5878 for 220 bulls sold in 10 sales so far this autumn season. Mount William stud at Willaura, Vic topped the averages at $8202 for 37 bulls and also sold the highest priced bull at $26,000.

The Autumn bull selling season is far from over, with a further 17 sales listed in April and 15 sales for May including National Sales for the Hereford, Limousin and Murray Grey breeds all held at the Wodonga, Vic Selling Complex.

In addition there is the Dubbo Poll Hereford Sale in Dubbo on June 4 and the Dubbo National Shorthorn sale on June 12.