MAXIMISING the number of calves on the ground in a defined joining period is one of the primary objectives of any beef breeding business.

However, according to Coolac veterinarian, Tom Graham*, many producers miss this opportunity by failing to forward plan and manage joining periods effectively. 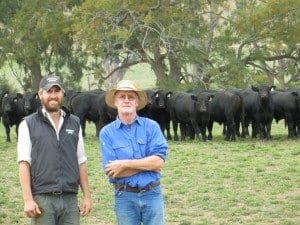 “A lot of producers already know the theory, but so many fail to put it into practice,” he said.

Dr Graham, who is also a local beef producer, believes one of the most common and costly mistakes producers make is being too complacent about bull and herd health leading up to and during the joining period.

“Most producers, including myself, have experienced bull failures but instead of saying, ‘the bull broke down that’s why I’ve got so many empty cows’, we need to accept fault and address it as a management failure of something we could have controlled,” he said.

Dr Graham believes producers in southern states production systems should make an annual practice of getting their bulls examined by a veterinarian for fertility, soundness and ability to work six-to-eight weeks prior to joining.

It is also a good time to administer the vibriosis vaccine, providing bulls with maximum coverage during the joining period.

Once out with the cows, bulls should be inspected closely, at least twice a week (daily even better), during the first three weeks of joining.

“That means casting an experienced eye, watching bulls work and looking for penile dysfunction or  injury, not just driving past and saying ‘he’s there’,” Dr Graham said.

“After that period, at least 65pc of females should be in calf so checking bulls, although still important, is less crucial.”

He estimates between 8-10pc of young bulls are injured during the initial three weeks of joining.

Unfortunately, when it comes to vaccinating bulls, particularly for vibriosis, Dr Graham believes there are few producers who actually do this.

“In my opinion, vibrio vaccine just isn’t used enough; neither is leptospirosis vaccine, usually administered as 7 in 1. Leptospirosis is not only a costly reproductive disease, it’s also a human health risk.”

“Producers can administer it to pregnant females at pregnancy testing.”

Dr Graham said monitoring and testing for pestivirus (BVDV) is also important and in his veterinary service-area, it was very rare to find a naïve (pestivirus-free) herd.

He recommends seeking veterinary advice, testing and, at the very least, vaccinating maiden heifers but for a better outcome, aiming to blanket vaccinate the entire herd.

The decision of when to join should be made ‘in-synch’ with the environment, so it coincides with females’ nutritional needs pre and post calving.

“For an autumn calving production system, I’d recommend females are above body condition score 3.5 (on a scale of 1-5) to ensure they re-join on time and can feed a calf as they approach winter,” he said. Spring calving herds could afford to be 0.5-1 score less.

Dr Graham believes heifers in southern production systems should be joined for six weeks and cows for nine.

“I don’t mind if heifers are joined for longer, as long as late-calvers are identified,” he said. “If they are late to join first time round, they will always be late.”

Bulls should be removed from cow herds as soon as the joining period is over.

“Economic modelling has shown that tighter joining periods with some empty females are more profitable than, say, a 20-week joining period and no empties,” he said.

Producers need to select bulls with Estimated Breeding Values that meet their market goals, however, Dr Graham emphasises the importance of structure and critical assessment before buying to ensure bull longevity and that only positive structural traits are being passed on to the herd.

“Under-utilised” is how Dr Graham describes the insurance of bulls, particularly for the first six months of their working life.

“Most bulls, if they are going to break down, will do so during this period,” he said. “With the price of commercial bulls now, I think this a worthwhile investment.”

* Tom Graham graduated from the University of Sydney in 2009 with a degree in Veterinary Science, returned home to work in the family business both as a large animal veterinarian and on the family farm which includes the Bongongo Angus Stud. The stud today runs over 800 registered breeders and is backed up by a commercial herd. It is now based at Riverview, on the Murrumbidgee River between Jugiong and Coolac.