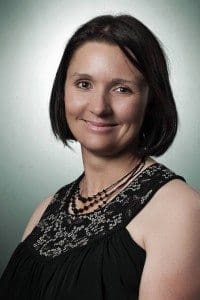 “There’s no doubt that if we can improve genetics we can improve our bottom lines – the cost of genetics is sometimes quite expensive and most of industry is only using traditional methods, and not getting the best out of what we are already purchasing, Kara said.

“That’s where the Nuffield scholarship fits in – I was really looking at better and cheaper ways of accelerating genetic progression through reproductive technologies such as artificial insemination (AI) and embryo transfer, so trying to get the best genetics out that we have, cheaply and on a large scale.”

Along with her husband Darcy and two children, Kara breeds Santa Gertrudis cattle on their home property Rosehall, near Mundubbera, and a second breeding/trading block at Elton Downs, near Hughenden in North Qld.

She says that Bos Taurus cattle such as Angus, Hereford and other European breeds have had a more successful history using fixed-time AI, and it’s now time to improve the techniques for the northern Bos Indicus breeds.

”I went in search of what people were doing in similar environments such as Argentina and Uruguay and found they were doing AI there on the breeds and also at the size and scale I wanted to look at.

“In particular I had my heart set on seeing Argentina-based Dr Gabriel Bo, a world leader in reproductive technology, particularly in tropically-adapted cattle, and Argentina does a lot of AI on their herds, so that was the main reason I wanted to go there.

“The second benefit was they certainly have a lot of the same climatic conditions and a tougher environment in the south and I also looked at sheep reproduction while I was there, which I found very enlightening for me going back into cattle.” 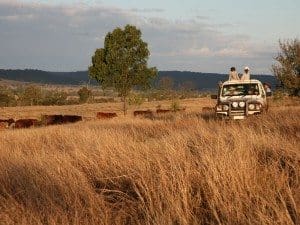 However, it wasn’t just South America where Kara uncovered valuable information, with the Canadian dairy industry also proving to be a worthwhile visit.

“When I was in Guelph, Ontario, I met with people from the university there talking genetics and genomics and mapping genotype, and what I took away was that we’ve certainly got to go a lot further in Australia with those sorts of things.

“I also went to Semex headquarters, where they have about 500 bulls and they are taking semen from them every day – they are extensively using genomics as well as AI, which has given them a huge lift in production,.”

So where to from here for Kara and her family’s central Queensland beef cattle operation now she’s back home from her Nuffield studies?

“I’ve already started trialling tactics like temporary weaning of cows during AI and I’ll probably be re-syncing my heifers this year to further reduce my calving period.

“But I got far more out of it than just my own topic, I looked at a lot of other things that we will probably incorporate in our business later on, such as value-adding, looking closer at our costs of production and how we can do things differently and whether or not there are other industries we can add or complement to our existing business.”

Kara’s scholarship was supported by Meat and Livestock Australia. You can watch Kara presenting her findings at the Nuffield Australia National Conference in Launceston here https://vimeo.com/108776338 and follow her on Twitter here @KnudsenKara or at www.knudsencattle.com.

Source: Nuffield Australia/Cussons Media. Nuffield Australia provides opportunities to Australian primary producers and managers between the ages of 28 and 40 to travel the globe investigating a research topic important to them and Australian agriculture. The organisation is currently taking applications through to the 30th June 2015 for the 2016 scholarship program. A $30,000 bursary is provided to successful applicants to carry out their study over a two-year period. To keep up with the latest from our organisation, please connect with us at www.nuffield.com.au, on twitter @nuffieldaust and #nuffieldag, and on Nuffield Australia’s Facebook page.