Getting a better handle on docility measurements THE importance of docility as a beef cattle trait was highlighted in a recent survey of more than 1200 beef producers across Australia, which found temperament was the most important trait when selecting a bull.

Docility measurements are typically taken at weaning, which has the advantage of all calves having had minimal handling, allowing them to express variation in their temperament. This variation is important, because a big part of the temperament seen in animals is the result of their past handling.

In order to make gains in docility, it’s necessary to record the trait, because it is only with the accurate description of the trait that selection decisions can be made without the impact of non-genetic factors. By recording docility, we have the potential to benefit from improved temperament.

The temperament of an animal has a big impact on its value within a beef operation and when temperament is discussed, we are talking about the way animals behave when being confined or exposed to usual situations (e.g. being separated from the herd). The benefits of a superior temperament in cattle are well understood and include:

For seedstock producers, temperament is of particular importance due to the significant impact it has on the profitability of their clients’ operations. Importantly, temperament is highly heritable and lacks any known antagonistic genetic relationships, meaning improvements can be made in temperament without impacting negatively on other traits within the breeding objective.

Using the Angus breed as an example, docility scores taken on calves between 60 and 400 days of age are used to calculate Docility EBVs within the TransTasman Angus Cattle Evaluation (TACE).

Animals can be scored for docility using either a crush or yard test:

While docility scores from both scoring systems are acceptable, the crush test is more commonly used as animals can be scored when moving through the crush for other purposes (e.g. weighing, animal health treatments). 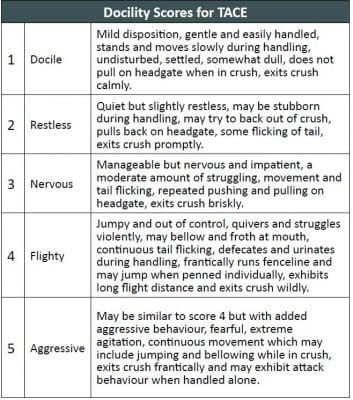 When using either the crush or yard test, the behaviour of animals should be observed and animals scored using the criteria displayed in the following table.

When should animals be scored?

Docility scores in Angus must be recorded when animals are between 60 and 400 days of age for inclusion in TACE.

The recommended time of scoring is at weaning or shortly afterwards. The advantage of scoring at weaning is that all calves should have had minimal handling and so will express variation in temperament. Variation in handling between animals prior to scoring should also be minimised.

Only one docility score can be analysed in TACE for each individual animal.