An embryo freezing process known as vitrification has been refined to the point where it is consistently achieving pregnancy rates of 50 percent or greater, promising ‘game-changing’ benefits for the beef industry.

The potential to stockpile embryos for convenient use offers potential to supercharge transfer of the best cattle genetics throughout Northern Australia. The process is also about to be taken up in Vietnam, where Australia sells genetic material including embryos. 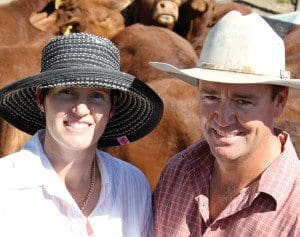 That’s according to Simon Walton, from the Australian Reproductive Technologies facility near Rockhampton, who thanks visiting Vietnamese researcher Do Van Huong for fine-tuning the process as part of his CQ University project.

The cryo-preservation by liquid nitrogen process, known as vitrification, utilises ultra-rapid cooling of cattle embryos produced by IVF to -196C, enabling them to be stockpiled and transferred anywhere and at any time that is convenient.

“This technology is the single biggest leap forward in artificial breeding for the beef industry in some time,” Mr Walton said.

He says there is potential for the new process to be used in the transfer of 20,000 cattle embryos in Vietnam in the near future.

While Mr Walton is excited about the prospects for ART’s international ventures, he says that his main drive to perfect the technology is its application in Australia, and particularly the northern beef industry.

Historically, the freezing of IVF embryos in cattle, as opposed to humans, has posed many challenges including poor survival rates of embryos frozen by conventional methods.

Meanwhile, Droughtmaster stud cattle breeder Darren Childs from Glenlands Stud near Rockhampton, who has worked closely with ART over a number of years, said that the recent 50pc success rate exceeded all expectations, and that the new process would assist in meeting the industry’s demand for improved genetics.

“The advent of better cattle prices, a need to re-stock and the arrival of institutional investors into the sector has meant that we can’t keep up with demand for quality tropically-adapted bulls,” he said.

“This new process will assist us to meet the ever-increasing supply requirements from our customers.”