Bull breeders press on with autumn sales, despite bushfire impact

SOME seedstock producers preparing bulls for upcoming annual autumn sales fixtures are pressing on with their sales, despite being hit hard by recent bushfires.

Bull breeders in some parts of NSW and Victoria have seen large areas of country burnt out, fencing, sheds and other infrastructure destroyed, and stock lost in the lead-up to their annual autumn sales. 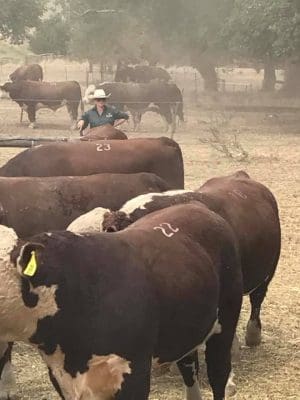 Typical is southern NSW Hereford bull breeder James Pearce, who says he will proceed with his February 19 Yavenvale annual autumn sale as scheduled, despite losing all but 80ha of his 2000ha of country near Adalong to extreme fires in late December.

The local Dunn’s Road fire started on 28 December in forestry/pine plantation country after lightning strike, breaking out on 30 December onto the Pearce family’s Yavenvale property. In total, an estimated 300,000ha of country was lost in the region, as it merged with the Green Valley fire, burning all the way to Adaminaby.

Mr Pearce, the brigade captain for his local bush fire brigade unit, said there was no stopping the fire once it jumped the range. Most of his near-neighbours in the same valley also lost 95pc of their country.

Yavenvale had a body of feed on it at the time the fire struck, but was tinder dry.

“The unusual thing for us was to have such a hot northerly wind behind it, through the night, which didn’t let up,” he said. “We’ve never seen fires with this intensity before,” Mr Pearce said.

“We think there are major discussions to be had over how publicly-owned country is managed for fuel load. If this fire had started on private farming land, we don’t think it would have got anywhere near as big as it did.”

The Yavenvale stud calves about 800 registered Hereford females each year, split between autumn and spring calving, with another 300 commercial cows run on the property.

Bushfires never occur at a good time, but the business was at its busiest stage of the year when the fire struck, within six weeks of its annual autumn sale date.

The Pearces managed to save their sale complex where sale bulls are presented, but lost extensive areas of fencing, a dwelling and some sheds, in addition to burnt-out paddocks.

The paddock where sale bulls were being fed was lost, but fortunately the gates were swung as the fire approached, and no losses were sustained. Another 150 head, mostly registered breeders and heifers perished in the fire however.

“Things have settled down on that front now,” Mr Pearce said.

“We’re normally used to having paddock feed available to help prepare bulls, but since the fire we are entirely reliant on silage and hay for roughage, plus and pellets.

Since the fire burnt out most of the property, Yavenvale has bought about 2100 large bales of hay to support sale bulls and other stock.

About 85pc of the country is now destocked. Some slaughter-ready steers and heifers were sold early into the Teys Grasslands program, young heifers were removed to a second family property near Wagga, with remaining cattle being confinement-fed on-farm.

“We thought seriously about pushing our sale back at first, but we’ve decided to press on”

“Things have been turned in their head, but we now have the manpower and a system in place that will allow us to full-feed remaining cattle for the timebeing,” Mr Pearce said.

“We thought seriously about pushing our sale back at first, but we’ve decided to press on,” he said.

The stud had its open day on Wednesday, attracting a strong attendance of established and prospective new clients who were not deterred by the fire outcome. The property has since received 35mm in three falls, producing a short green shoot, but nothing yet of feed value.

“We need regular rainfall for that to develop into usable feed. Historically, a January/February break is too early for us, but we hope this year is the exception,” Mr Pearce said.

Bulls will be vet checked in coming days, and while there was some delay in catalogues, they are now being circulated.

“The biggest impact has been in labour and resources,” Mr Pearce said.

“You can only stretch yourself so far. The first two weeks after the fire was a massive blur, as we had to sell stock, secure hay, identify losses and deal with insurance.”

“But we felt it would have created even more problems by pushing the sale date back, trying to notify clients that the sale was not going ahead. Postponing would have meant changes to our own management calendar, at a time when we start calving again,” he said. “A postponement would have echoed-on into the following year, for us and our bull clients.”

While some of Yavenvale’s bull clientele had also lost country to fires in December/January, the fact that the stud has a geographically diverse client base meant the impact of fires will be less than if we sold most of our bulls locally, Mr Pearce said.

‘We had no other option’

Further south near Holbrook, composite bull breeder Tom Hicks lost more than 1000ha of country near Jingellic after late December fires, but fortunately the business’s main property near Holbrook was left intact. In total, about half the Hicks Beef operation’s carrying capacity was lost, however, together with more than 50 head of mainly commercial cattle.

This year’s Hicks Beef autumn bull sale scheduled for 5 March will go ahead as planned.

“For a little while I was in two minds, but realistically we did not have an option,” Mr Hicks said.

“We’re certainly behind schedule in a few areas due to the disruptions caused by the fires, but we’ve decided to stick to our original sale plan,” he said.

The business sold steers and leftover trade heifers straight after the fire to lighten numbers, and about 50 of this year’s autumn sale bulls are being run on the second Holbrook property.

Some clients’ properties had also been impacted directly by the fires, and for others that had not been burned out, they were now well-behind due to the time spent fighting local fires and mopping up, Mr Hicks said, including some who were well outside of the fire zone.

He said arrangements could be made for delayed delivery for bull clients affected by fires, who would have difficulty taking bulls home straight after this year’s sale.

Other southern bull breeders have made changes to their 2020 autumn sale plans, not because of bushfire impact on their own properties, but due to country being burnt out on properties run by their commercial bull clients.

Among them is Alpine Angus, which has decided to shift its sale date back to Tuesday March 24, due to bushfire damage on a number of regular clients’ properties. A catalogue of 90 registered bulls will be offered.