With more than 1000 international delegates in Rockhampton for Beef 2015, some serious meat and live export industry deals are expected to be done beofre the week-long expo is over.

Among the many Australian live export companies meeting with new and existing customers at the week-long event is RuralCo’s new live export division Frontier Agribusiness International, which marked its first anniversary since making its first shipment on Tuesday.

On May 5, 2014, Frontier Agribusiness International opened for business when it shipped 3223 Brahman feeder steers and feeder heifers from Darwin to Jakarta for Indonesian importer and feeder TUM.

In the past 12 months the start-up live exporter has achieved strong first-year growth, shipping 114,946 cattle in that time, and 4300 breeding sheep, to a range of markets including Indonesia, Vietnam, China, Malaysia, Russia and Kazakhstan.

That volume has included more than 50,000 cattle exported to the company’s first customer in Indonesia, TUM.

“We are seeing unprecedented amount of international guests here at Beef 2015, and that ties into the theme of unprecedented interest in the Australian beef supply chain around the world,” he said.

He said a lot of international visitors would be using their visit to Beef 2015 for “fact-finding” purposes, ranging from long term existing customers to Chinese entities looking ahead to opportunities should a Chinese feeder and slaughter protocol be implemented, and Vietnamese importers looking to further understand how the Australian Vietnam supply chain can be refined.

“There is a very broad range of types of customers here,” Mr Browning said.

“And I think it is more about knowledge and education rather than doing a deal – but it is quite likely a deal or two will be done.”

Mr Browning told Beef Central he was very pleased with Frontier’s progress in its first 12 months of operation.

“We are still refining our supply chains to provide better shipping solutions, and more cost-effective.

“Whilst we are quite proud really and pleased that what was just an idea just over 12 months ago has just exported over 115,000 cattle, we’d like to think we are just getting started.” 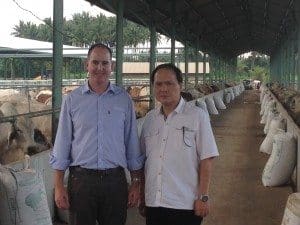 Ruralco interim CEO Travis Dillon with the head of TUM Buntoro Hasan at their 50,000 head Jakarta feedlot in February this year.

RuralCo has announced major personnel changes in the past week, with the resignation of the company’s chief financial officer Ruth Martin last Friday followed by an announcement Ruralco CEO John Maher stepping down on Monday.

He has been replaced in the interim by acting Chief Executive Officer Travis Dillon, formerly RuralCo’s General Manager Rural Retail.

Asked about the ramifications of the change, Mr Browning said Mr Dillon was the chairman of the Frontier International Board and had taken strong interest in the new startup, including visiting China and Indonesia with Mr Browning last year.

“He (Mr Dillon) has taken the time and trouble to get to know this business and he couldn’t be more supportive over the last 12 months.

“You can imagine a startup business in live export doing that amount of cattle, it hasn’t been without a few bumps in the road, and he has been extremely supportive, very calm, and he has gained the knowledge in this business.”