PRICES for 90CL cow beef could come under pressure if US beef and dairy cow slaughter rates climb over what could be a dry summer, according to Rabo’s leading animal protein analyst, Don Close. 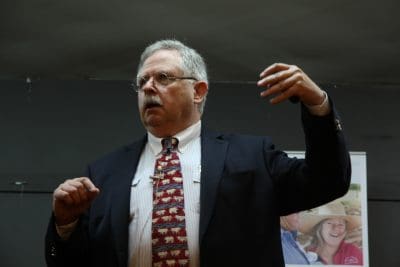 “We are already pressing the envelope on non-fed slaughter capacity and the added problem with that is that when we get to a period of forced liquidation…every damn one of them wants to come to town on the same day.

“That’s going to be a challenge.”

Australia and New Zealand’s combined share of US total beef imports is currently sitting at around 4-4.5 per cent, down from 12-14pc in the US drought of 2013 and 2014.

“90CL lean trimmings have been trading flat as a board for the year to date… and that’s been counter-seasonal because of increased supply of product coming to the market.”

US grinders blend lean trimmings with US-produced 50CL trimmings, which Mr Close described as “the by-product of the fed beef system”.

“We are absolutely dependent on that imported supply of 90s to…blend off this mountain of 50s…to a 75-85pc lean ground-beef product.”

Mr Close said the market share held by Australian and New Zealand 90CL product was at the low end of the historical range.

“That’s because we are generating so much more ourselves.”

Mr Close said total year-to-date US cow slaughter was up 7.5pc on the corresponding 2017 period, with dry conditions coupled with unattractive terms of trade for many dairy producers fuelling the rise.

He said Australian 90s should carry a 2-5c/lb premium to US domestic 90s because of its added value as a frozen product which grinders liked to keep the blades cool in their machinery, and improve the texture of the product during processing.

“If we don’t get your product frozen, we have the added expense of freezing it.”

“Currently the US 90s, even with our escalated slaughter, have been trading about 10-12c/lb premium to Aussies, and the reason for that is because you guys have stepped up slaughter.

“That 10 cents per pound may not look like much, but my concern with that is if we keep that discount of imported 90s well into the summer, that incentive to buy imported product will ultimately break our domestic market.

“It won’t be that you benefit and we lose; if we lose our domestic price of 90s, the imported price will go over as well, given supplies and where we’re at.

“I see a 10c spread creating a great deal of vulnerability to us both as we get into this year.”

The US beef cow herd bottomed at 27.8 million in 2014 in response to drought, and had rebuilt to 31.7m in January this year. 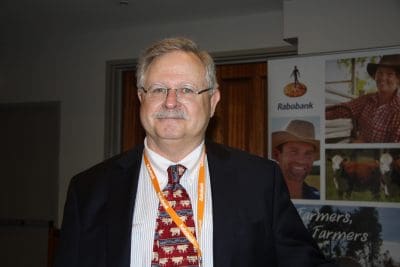 “With the modelling work we do, we think we will peak between 32 and 32.5m cows, so essentially we’re there.

“It is only with the return of massive drought that we see beef cow numbers dropping below 2014 levels.”

Mr Close cow numbers anywhere above the 2014 low should be able to support existing feedlots and meatworks, in contrast to the 2013-14 drought, which saw some operators close.

“We were sacrificing infrastructure. I think we can avoid that.”

Mr Close said around of 70pc of the US’ 31.7m beef cows was in a US state with measurable drought stress, and 34pc of the herd was in areas of extreme drought, but at least some rain could be expected up to late June to alleviate drought stress.

“The likelihood that we see some level of forced cow liquidation before we get through this summer is very high.”

Mr Close said non-fed cattle made up only 20pc of the non-fed beef market, and generally represented attrition of used cows and bulls.

“If we see slaughter rates increased because of forced liquidation, we could get into a scenario where we have more cows coming to market than we have space to hold them.”

Mr Close said cow slaughter was around 10.5pc higher than at this time last year, but this could be a combination of forced liquidation, and a function of increased supply.

Mr Close said the US dairy-cow herd of 9.5m could also contract in response to dry conditions which were fuelling grain and hay price rises.

Mr Close said the US beef industry has seen a 20pc increase since 2002 in the percentage of carcasses grading choice and prime in response to an industry realisation that it needed to provide a quality eating experience for consumers every time.

“It currently averages in excess of 80pc, and our low ebb was 55pc.”

“That is when we started seeing demand gain momentum. I can tell you right now those cattle are still getting better and they’re going to get considerably better because of that background and that effort in genetics.”

“I have been in the industry for three full cycles, and this one has been incredibly good.

“Never in my working career have I seen a global marketplace that is as exciting and as driven by change as we have now. The opportunities are incredible.”

“We are now seeing an insatiable appetite for high-end middle meats.”

Mr Close said a challenge for the US beef industry could come in the form of an economic slowdown caused by inflationary pressure which were already affecting household budgets through indicators like rising gasoline prices.

“We are currently in the second-longest period of economic expansion in US history from June 2009 to the present, and I have very serious doubts we will take out that all-time record of 120 months.”

“My take on this one is that within a year to the next 18m, the likelihood of us seeing some kind of recessionary pressure in the States is very high.

“We are going to have interest pressure in the States from the government’s activity alone, let alone the aggressive consumer behaviour.”

Mr Close said non-essential items like gourmet burgers and home-delivered meal-kits could be hit by a downturn in spending., but he said he believed the future for success in the US and Australian beef industries was to focus on quality.